Here we go with Round 2 of the big NASCAR vs. NFL match-up. This week, the NASCAR on ESPN gang is armed with a tough and high-banked one mile track that will generate much more excitement than Loudon, NH. Add-in the new restart rules and it should be a great opportunity to keep sports fans watching NASCAR.

Allen Bestwick will be first with NASCAR Countdown at 1PM. Joining Bestwick will be Rusty Wallace and Brad Daugherty in the Infield Pit Studio. Tim Brewer will be in the Tech Garage. Reporting this week will be Jamie Little, Shannon Spake, Vince Welch and Dave Burns.

Shortly before the 2:15PM green flag, Jerry Punch will lead his team of Dale Jarrett and Andy Petree on the air to call the race. This trio is charged with relaying the excitement of the race to the TV viewers. That has proven to be a tough assignment for Punch who starts fresh and fades long before halfway.

Expect Bestwick to be on the air from the infield after caution periods and when field updates are needed. Keeping a perspective on all the cars in the race and not just the Chasers has been the Achilles Heel of the ESPN crew. Fans of the top drivers who did not make the Chase do not suddenly change their loyalty in September.

Dover is fast on TV. It is tough to sneak Tim Brewer on the air under green. It is almost impossible to play back recorded material under green. It is also a big risk to use the in-car cameras live. One moment at Dover can change the complexion of both the race and the Chase in a heartbeat.

Look for the cameras at the end of the straights to offer the best perspectives. The worst come from the "high" cameras above the start/finish line. The director will work hard to cut around the two bridges over the track all day long. Cutting cameras constantly for over three hours is really the toughest challenge on this track.

This post will serve to host your comments about the ABC coverage of the Sprint Cup Series race from Dover. To add your TV-related opinion, just click on the comments button below. This is a family-friendly website, please keep that in mind when posting. Thank you for taking the time to stop by.
Posted by Daly Planet Editor at 12:10 PM 339 comments: 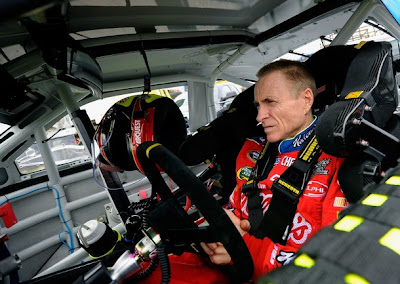 Mark Martin and Juan Pablo Montoya put on a great show from Loudon last week but that was not enough to keep NASCAR fans watching on TV. The first week of the NASCAR vs. NFL match-up resulted in record low TV ratings for ABC and some serious head scratching.

There is no doubt that the NFL is on a roll. They are a sophisticated league with great media awareness and a dynamic television package. This Sunday, the same match-up happens as Allen Bestwick takes the NASCAR Countdown pre-race show and goes up against a huge slate of regional 1PM NFL games.

Bestwick has his usual partners alongside in Rusty Wallace and Brad Daugherty. Wallace is always opinionated while Daugherty has overstayed his welcome. He is now merely a cheerleader who is a little too excited and a little too loud. That is a shame because his presence originally made a strong statement back in 2007.

ABC's pre-race show repeats what fans have already seen on ESPN2's NASCAR Now and SPEED's RaceDay morning programs. After three hours of pre-race information, there is very little Bestwick can do to keep fans from watching the first hour of the NFL games.

Sometimes, the NASCAR on ESPN team actually replays the same features from the Sunday morning NASCAR Now program on the pre-race show. The live ESPN news reporters sometimes also offer the exact same information from that morning, often using the exact same words. The bottom line is that it is simply not working.

By the time 2PM rolls around and NASCAR gets the cars ready to start, many fans are engrossed in the NFL games and simply record the race for later viewing. Without the side-by-side commercials, that later viewing usually involves fast-forwarding through about one-third of the entire race. That is the percentage of commercials to content.

While the NFL is an organized TV assault that is simply designed to dominate, NASCAR TV is a quagmire of agendas, egos and issues. This Sunday there are eleven hours of national TV that will contain primarily NASCAR content. That is a powerful platform for one brand and for one single event.

Recently, Mike Helton confirmed that NASCAR is looking at moving the start times back to 1PM for Sunday races in the Eastern Time Zone. As fans may recall, it was David Hill from Fox who made the loudest argument to push the times back as far as possible for TV purposes.

By now, it may have dawned on NASCAR that Hill's TV network is offering one of the 1PM NFL games that has pushed NASCAR to the back burner. Hill and his bunch are long gone from NASCAR and probably chuckled as they thumped ESPN's offering on ABC last Sunday.

Dover is a dynamic racetrack with great competition and non-stop excitement. Again this year the challenge of getting that feeling across to the TV viewers falls to Jerry Punch. This track requires a lot of work from the play-by-play announcer as the action is non-stop. Punch will have Dale Jarrett and Andy Petree alongside.

The ESPN production team cannot go to the Tech Garage for Tim Brewer under green flag conditions. They cannot play back driver soundbites while racing is under way. They cannot take in-car cameras live under green. The potential to miss critical action during the Chase is too great.

This is going to change the way the race is produced. A focus on hardcore racing action throughout the field is the only way to keep the existing viewers interested and perhaps get some back who have been watching football. No bells, no whistles and no lapses in intensity from the announcers.

The NASCAR vs. NFL challenge is even harder under this 2PM scenario because the race continues even as the second round of NFL games gets underway at 4PM. Again, viewers have a choice and it is up to the ESPN producer to reset the scene at that time and provide a recap for TV viewers who may be just checking on the race.

Dover may offer a solid opportunity for NASCAR to make a dent in the NFL dominance and bring fans back simply because of the great racing. The challenge for the ESPN team is to stand back and let it happen. Not doing too much in TV is often a bigger challenge than not doing enough.

There are great stories unfolding, the track offers good racing and the teams are poised to tackle one of the biggest challenges of the Chase. Round 2 of NASCAR vs. the NFL should be a good one.

We welcome your comments on this topic. To add your opinion, just click on the comments button below. This is a family-friendly website, please keep that in mind when posting. Thank you for taking the time to stop by, we will be live blogging the race at 1PM right here on TDP.
Posted by Daly Planet Editor at 12:30 AM 12 comments: