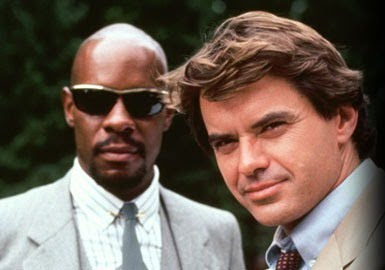 Spenser was a real New Englander. A former Boston cop turned private eye, he lived a unique lifestyle that centered around the search for truth. Hawk was his sidekick who had his back when times got tough. They were real men, made no excuses and got to the bottom of things by doing what they had to do.

Lindsay Czarniak hosted the pre-race show with Kyle Petty and Larry McReynolds. The program featured a solid interview with Kurt Busch on the TNT set and a well-produced feature on former driver/owner Cotton Owens.

Adam Alexander called the race with Wally Dallenbach Jr. and Petty in the TV booth. On pit road was Matt Yocum, Chris Neville, Marty Snider and Ralph Sheheen. These veterans have done a good job, although NASCAR rookie Neville has been earning his stripes dealing with angry drivers.

Larry McReynolds was moved to the cutaway car several times for updates during the race. Unfortunately, almost every single time something significant happened on the track. In the end, McReynolds wound-up looking foolish not only for the fundamental issue he was discussing, but for the coverage missing the action on the track.

Alexander has a casual style that resembles a reporter more than a true play-by-play announcer. But, his information is solid and he has no problem directing traffic. It just seems that he does not blend well with Petty and Dallenbach in the booth. It just feels awkward on the air.

Petty is a known commodity due to his regular TV work with SPEED, but Dallenbach is always a wild card as he is not connected to the sport except for these six races. Some enjoy his irreverent style, while others suggest his knowledge as an analyst is outdated.

TNT has brought the normal NASCAR TV struggles with commercial breaks and NHMS was no exception. Viewers have come to understand that this heavy level of commercial integration is now part and parcel of the sport.

The positive aspect was that the TNT races brought RaceBuddy with them. This online app will not be in use for the ESPN races and that is going to be a tough transition for fans. RaceBuddy gives TV viewers a workable alternative to continue watching the live racing during a commercial break.

The flat track of New Hampshire resulted in some early incidents before the race settled down into another fuel mileage contest. A late penalty on Dale Earnhardt Jr. upset many fans and TNT did not really follow-up on the specific pit violation.

The finish was without excitement and totally dominated by fuel. It was a tough way to close out the final NASCAR on TNT race for a network that lives on drama.

This post will serve to host your TV race wrap-up comments for the TNT coverage of the Sprint Cup Series from New Hampshire Motor Speedway. To add your TV-related comment, just click on the comment button below. 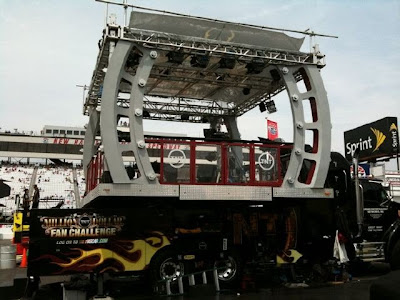 It's time for the final Sprint Cup Series race on TNT. It's been a summer of good technical innovation combined with the same old gripes about commercials.

Lindsay Czarniak is off to ESPN after hosting this race. She starts the telecast with the pre-race show. Kyle Petty and Larry McReynolds are on the infield rig. Kurt Busch is the guest. Cotton Owens is the Pride of NASCAR feature.

Adam Alexander is in the booth with Wally Dallenbach Jr. and Petty. Marty Snider, Matt Yocum, Ralph Sheheen and Chris Neville are the pit reporters.

The story of NHMS is frustration. It's a flat track that features the pot slowly boiling until the tempers explode over the lack of passing and tire grip. Once the cautions come, they come frequently. The key issue is how long the field will stay patient and run under green.

This is the final weekend of RaceBuddy. The free online app at NASCAR.com has four in-car cameras, two battle cams and also features pit road and the backstretch cams. It's just a nice addition to the TV coverage. ESPN will not have RaceBuddy for the remainder of the races.

Adam Alexander is still in the learning curve for a play-by-play announcer. His style is low key in the booth and while he certainly does work for the TNT producer, he is not someone who pumps excitement into races.

TNT has been a mixed blessing. The network has changed the post-race procedures as a response to fan feedback. TNT has made good pictures, had no technical problems and delivered a solid package for what they had to work with. It's just a short summer visit that always leaves fans wondering what could be.

This post will serve to host your comments on the Sprint Cup Series on TNT. To add your TV-related opinion, just click on the comments button below. Thanks for stopping by.