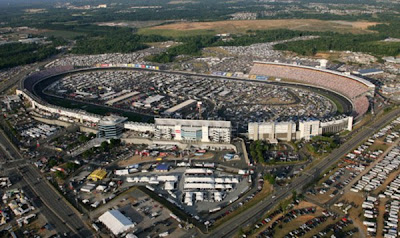 The truck field is a little bit thin because the Sprint Cup and Nationwide Series are racing in Dover. This should give an opportunity for drivers like Todd Bodine and Johnny Sauter to finally get some attention.

SPEED starts the night with The Set-Up at 9PM. Hosted by Krista Voda, this simple and effective show uses pit reporters Ray Dunlap and Adam Alexander to provide a quick preview of the race.

This is the final race for Johnny Benson to work with the on-air team of Rick Allen and Phil Parsons. JB has been good and learned to work himself smoothly into the broadcast. His experience in this series has also added a great perspective to the telecasts. Benson has yet to announce his plans for 2010.

SPEED has a unique issue with this event. There may be may start and park trucks who do not even run up to the first fuel stop. If the racing at the front of the pack is not good, it may be tough to keep things exciting on this big track.

Over the years, no TV crew has proven to be more flexible and attentive to what is actually happening on the track than this one. If the hard racing begins to fade, look for the producer to switch gears and start to tell the stories of all the teams in the race on the track.

Dunlap and Alexander are also veterans who can interview anyone on pit road, even while the race is still in progress. Hopefully, there will be enough viable teams to keep the action going for the fans in the stands and the TV viewers.

SPEED's presentation is simple and straightforward. The focus is on the racing. There is no infield crew, no cutaway truck and no hype. What happens in the event is what viewers see on TV. This approach has paid dividends for the network with higher ratings and positive reviews.

This post will serve to host your comments on the Camping World Truck Series race from Las Vegas. To add your TV-related opinion, just click on the comments button below. This is a family-friendly website, please keep that in mind when posting. Thank for taking the time to stop by.
Posted by Daly Planet Editor at 8:00 PM 186 comments: 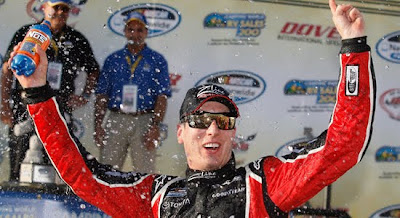 Due to the low number of visitors on this college football weekend, we are extending this post to cover Happy Hour on ESPN at 7PM and also your post-race N'wide Series comments. Just click the comments button below. Thanks.

NASCAR Countdown will lead the way at 3PM to set-up the Nationwide Series race from Dover, DE. We are once again in the scenario where college football will probably run past 3PM, so this program may begin on ESPN Classic.

Allen Bestwick, Rusty Wallace and Brad Daugherty will be in the Infield Pit Studio for Countdown. Tim Brewer will be nearby in the Tech Center. ESPN has Jamie Little, Shannon Spake, Vince Welch and Dave Burns reporting.


Once things get underway with the 3:30PM race coverage, it will be Marty Reid calling the play-by-play. He will be joined by Dale Jarrett and Andy Petree in the broadcast booth. These three are still trying to figure out a good racing balance on the air.

Jarrett and Petree work with Jerry Punch on the Sprint Cup Series who provides absolutely no leadership or commentary. Here on the Nationwide trail, Petree and Jarrett have to figure out the energetic and honest Marty Reid who embraces the traditional role of a play by play announcer. So far, this combination is not working out.

Reid was far more effective with Randy LaJoie and Rusty Wallace. These three had fun despite their diverse personalities. Wallace worked an entire IRL season with Reid for ESPN and is clearly comfortable with him. LaJoie takes great pleasure in poking fun at Wallace about the struggles of his Nationwide Series team and adds just the right touch of personality that this series really needs.

Jarrett and Petree sound tired right now and who can blame them? It has been a long season and even with some early vacations, double-duty never works out well.

Dover has two bridges over the track that the TV director has to cut around. The coverage needs to keep ahead of the cars, showing more headlights than tail lights. The best camera shots are from Turn 1 and Turn 3 as the cars head down the front and backstretch. That is where the passing occurs.

In-cars are tough to use live, but great for replays. This is especially true after accidents, where in-cars can often tell the tale of who is to blame. Using the in-cars live forces the TV viewer to miss so much action it is almost unfair. Martin Truex Jr. is the in-race reporter for ESPN today.

In this race there is no Chase to deal with, but there is the temptation to focus all the coverage on the eight Sprint Cup Series cross-over drivers. As the season begins to head to a close, it is going to be important for ESPN to feature the drivers who have competed in the Nationwide Series regularly, especially if they are having a good run.

This post will serve to host your comments on the Nationwide Series race coverage from Dover on ESPN2. To add your TV-related opinion, just click on the comments button below. This is a family-friendly website, please keep that in mind when posting. Thank you for taking the time to drop by.
Posted by Daly Planet Editor at 2:20 PM 311 comments: