Weekend: The Beat Goes On 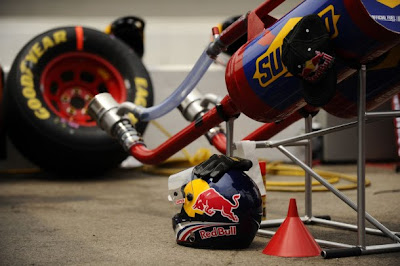 Update: Going to let comments on this topic continue through the weekend as fans add the issues they want to see followed-up by the NASCAR TV partners. So far, there have certainly been some interesting suggestions.

The big topic in our email, tweets and Facebook posts has been just how big the information gap appears on SPEED and ESPN since the NASCAR studio news shows all went off the air at the end of the season.

What is making this situation stand-out like a sore thumb this year is the fact that so many fans have access to social media. Events now unfold online and fans know the basics of what is transpiring. So, while it's great that a reporter can tweet something with a link to a breaking story webpage, it's ridiculous that the NASCAR TV shows viewers have come to trust and depend on to then flush-out those stories are gone.

Mike Joy from FOX tweeted: "Great time at "Stocks For Tots" last night. North Carolina Motorsports Hall of Fame and NASCAR Tech made a great effort to help kids in need this Christmas season." There were lots of big names signing autographs in one of the classic off-season functions. Joy made a point to pass along that local TV station WSIC and MRN's Kyle Rickey were the only media at the function.

Pete Pistone from MRN and CBS Sports tweeted: "Baseball season has been over for 6 weeks yet I've watched a ton of the MLB Network - sure wish we had a NASCAR TV option for off season."

The debate continued on the future of Kurt Busch, the new driver and crew chief for the Penske #22 and how Danica will find her way into the Daytona 500. Mike Ford is gone from the Denny Hamlin team and Darian Grubb still has not landed. Those are just a few of the topics in play this week.

This issue in general is not, however, a new one. Let's check the progress of TDP talking about off-season TV over the past few years.

December 27. 2008: "NASCAR TV Needs To Continue In December And January" - This was at the end of the second year of the current NASCAR TV contract. NASCAR Now had finally shown some promise, all of the NASCAR shows on SPEED were either Sunday or Monday and RaceHub did not exist.

December 23, 2009: "NASCAR Needs Off-Season TV Coverage" - End of year number three and in the first season of RaceHub it joined all the other motorsports shows on SPEED and ESPN by ending shortly after the NASCAR season.

December 13, 2010: "All Quiet On The Western Front" - Daytona had a new coat of asphalt, but that same old off-season silence in TV land was just the tip of the iceberg of issues for the TV coveage.

The most poignant story of this season in terms of affecting the sport in general may be about to unfold on Thursday.

Here is a brief excerpt from Dave Moody's update at Sirius-Speedway.com:

"Red Bull Racing's four-year run as a NASCAR Sprint Cup Series team will come to an end tomorrow (Thursday), when the last of approximately 150 employees will be laid-off and the competition shop shut down, presumably for good."

The failure of a global brand like Red Bull to mesh with NASCAR is amazing. Built from Red Bull dollars, this company chose to own the entire racing operation in Mooresville, NC. The closure is a story that needs national television coverage on SPEED, a network located literally right down the street from the race shop.

Unfortunately, this topic will not be discussed and debated with Dave Despain on Wind Tunnel. Ray Evernham will not be in the studio to give his reaction on Speed Center. Steve Byrnes will not be able to have the key personalities in this story drive over for an interview on RaceHub.

One fan wrote in an email, "It's like NASCAR TV just fell off a cliff." While ESPN is certainly out of the mix until February, let's keep an eye out and see if SPEED follows-up on the thrown together Monday night Kurt Busch Speed Center special and rolls-out some sort of regular off-season studio programming. It's certainly not too late to get back in the game, even if the rules may have changed.

As usual, we welcome your comments on this topic. To add your opinion, just click on the comments button below. Thank you for stopping by The Daly Planet.