Your Turn: Sprint Cup Series From Watkins Glen On ESPN 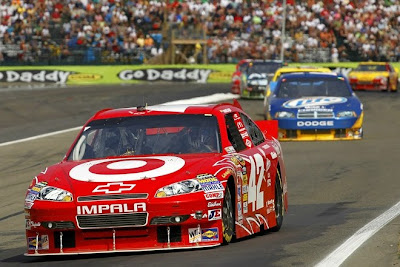 It's been a memorable weekend for the NASCAR on ESPN team. Good weather and great racing has a way of making the TV coverage even better.

ESPN presented a pre-race show that once again put Rusty Wallace on the spot for some comments on road course racing. Daugherty was once again the cheerleader for the sport which was easy to do given his success with Marcos Ambrose.

The booth was enthusiastic, but faced the common TV challenge that we see on road courses. The announcers can only see the frontstretch and have to rely on the TV monitors in the booth to view the rest of the course.

ESPN used aerial views of restarts to give a great perspective of turn one. The remainder of the course was covered with the standard array of cameras. There were no special effects or other nonsense that ESPN has tried to force into coverage over the last several seasons. This time, it was just about the racing.

Watkins Glen seemed to breathe a lot of excitement into the racing and made for an exciting presentation on TV. This is your opportunity to offer a comment about the coverage. To add your opinion, just click on the comments button below.

This is a family-friendly website, please keep that in mind when posting. Thanks for taking the time to stop by The Daly Planet.
Posted by Daly Planet Editor at 10:00 PM 41 comments: 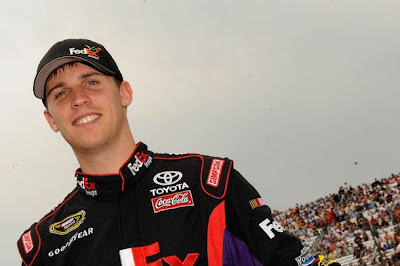 Veteran reporter Dustin Long posted these quotes from Denny Hamlin about his Twitter fines and subsequent use of social media on the Hamptonroads.com website.

Denny Hamlin admits he's not commenting as often on Twitter after being fined an undisclosed amount by NASCAR recently for comments series officials felt were hurtful to the sport. Said Hamlin: "I'd say half of the time I was on (Twitter discussing NASCAR stuff and whatnot. They really don't want me going there, so I'm not going to go there. It's just one of those things. I'm still part of that stuff, but obviously with getting a fine and everything, you've got to be a little bit more careful.''

Well, it was fun while it lasted. This season many fans have been enjoying a level of direct interaction with NASCAR personalities, including drivers, that has never existed before. It's called Twitter.

It was no longer a pipe dream to communicate with your favorite driver and have him answer you back. It happened every day. As the season progressed, drivers and teams began to understand that Twitter was a gold mine in terms of building a new NASCAR fan base and exposing sponsors directly to race fans.

Twitter technology is so portable that cell phones now offer an entirely new opportunity for NASCAR personalities to exchange all kinds of information and have conversations about the sport directly with fans. In a word, it was amazing.

TV personalities jumped on the bandwagon along with most of the NASCAR media. Teams, sponsors and even the sanctioning body joined the party. Each NASCAR series, all the tracks and most of the NASCAR TV shows have very active Twitter accounts.

Then, after a seemingly harmless chat about the value of late race "show caution" flags, the bottom fell out. It was AP reporter Jenna Fryer who broke the story of Denny Hamlin and Ryan Newman being secretly fined by NASCAR. Hamlin's penalty was supposedly for Twitter conversations.

Click here to read Hamlin's subsequent conversation about waking up to the fact that NASCAR had been watching his social media activities for months. "They did give me a pretty good log book of all the negative things I've had to say over the last couple of months," said Hamlin. It was a log book of Twitter comments.

NASCAR reinforced the edict of no negative talk about the sport by putting personalities on TV and radio to echo that theme. The result is that the content heard "on the air" is rather different than that expressed elsewhere.

Click here to view the candid online video from Darrell Waltrip, Larry McReynolds and Jeff Hammond about winning and The Chase for the Championship.

It seems ironic that it was Hammond on SPEED's Race Hub this week emphatically delivering the message of no negative talk in public about anything connected with NASCAR. Hammond said on Race Hub that if folks working in NASCAR did not like what the sanctioning body was doing, they should get out of the sport.

Here is an excerpt from Fryer's original story about the fines and what trying to control the public comments of drivers and personalities could bring:

But it’s also a slippery slope. NASCAR fans often choose their favorite drivers based on personality and competitive fire and after years of complaining that the stars had become too corporate, the racers this year were urged to let loose. From the “boys, have at it” policy that permits more aggressive driving to NASCAR encouraging drivers to cut back sponsor plugs in favor of raw emotion, now asking them to bite their tongue is a mixed message.

If drivers stay quiet on Twitter permanently the loss to NASCAR is going to be much greater than the damage one 29 year-old did debating debris caution flags with a NASCAR blogger. NASCAR may have closed an important social media door it can't reopen.

We welcome your comments on this topic. To add your opinion, just click on the comments button below. This is a family-friendly website, please keep that in mind when posting. Thanks for taking the time to stop by The Daly Planet.
Posted by Daly Planet Editor at 9:30 PM 54 comments: