Your Turn: Sprint Cup Series From Charlotte On ABC 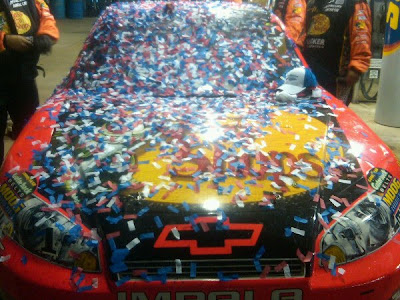 Allen Bestwick had a full house again in the Infield Pit Studio of Ray Evernham, Rusty Wallace and Brad Daugherty. Their comments were interesting from the start and continue to show the information gap between Evernham and the other two analysts.

Bestwick also provided the recaps out of commercial break and several times interacted with the pit reporters to provide updated information before sending the telecast back to the broadcast booth.

Marty Reid called the race and again had a tough time with the size and scope of a Sprint Cup Series event on a big track. Several times Dale Jarrett called out that there was an accident while Reid struggled to provide the reasons for other cautions. This is Reid's first season in this role on ESPN.

Andy Petree frequently disagreed with Tim Brewer in the Tech Garage. Brewer was thrown on the air several times in scenarios that just made him look awful. A stuck throttle on Kyle Busch's car and a failing alternator for Jeff Gordon wound-up with Brewer providing instant updates that were immediately dismissed by Petree from the booth. As we spoke about in the live race post, waiting for the right information before using Brewer is a real issue in the Chase races.

The lights at CMS are great, but the beautiful aerial shots of the speedway were few and far between. ESPN shoots these races like a football game, following the leaders and then moving to another shot only if something happens on the track. It is a philosophy of motorsports coverage that has been used for four seasons.

One bright spot was the pitstop coverage, under both caution and green flag conditions. It was great to see double video boxes on green flag stops and the wideshot at the end of pit road to see cars race off after caution flag stops.

ESPN delivered another race with no technical problems and that should be remembered. The technical folks gave the production people the tools to tell the story in compelling manner once again.

NASCAR faced tough competition tonight from Major League Baseball and college football. It was truly crunch time for the NASCAR on ESPN team.

Thanks to NASCAR Now Lead Reporter Marty Smith for the Victory Lane picture above.

Take a moment to give us your wrap-up of the race coverage tonight on ABC. To add your comment, just click on the comments button below. This is a family-friendly website, please keep that in mind when posting. Thanks for taking the time to stop by.
Posted by Daly Planet Editor at 10:56 AM 53 comments: