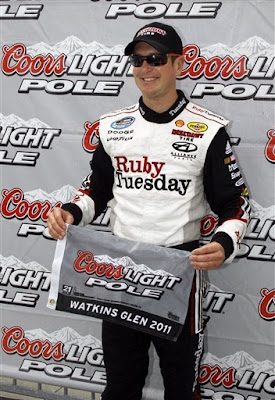 Rain is on the way toward The Glen. NASCAR has move the start up five minutes to 2:09PM because that is about all they can do.

Nicole Briscoe cranks things up with the NASCAR Countdown show at 1PM. She has Rusty Wallace and Brad Daugherty alongside. There are lots of stories unfolding, some involving the race and some involving The Chase.

Shannon Spake joins the pit reporters this week as Jamie Little is off doing the IndyCar race for ABC. Dr. Jerry Punch, Dave Burns and Vince Welch round-out the pit road group. Tim Brewer is in the Tech Garage.

Allen Bestwick, Dale Jarrett and Andy Petree are the trio in the TV booth today. Bestwick has been exactly what ESPN needed to get this coverage back on track. A road course requires a very different kind of TV coverage and this is the only such track for ESPN during the network's 17 races.

SPEED has been handling the support coverage, including the practice and qualifying. Once again, ESPN is only at the track for the NNS race. It makes for a little bit of an awkward transition, since the drivers and teams have been dealing with SPEED all weekend.

The challenge for the director is to try and back-cut to the best races on the track while also keeping a good handle on the ever-changing location of the leaders at full speed under green. This means he needs some good assistance both in the truck and from the camera spotters around the track.

This post will serve to host your comments about the Nationwide Series coverage on ESPN from Watkins Glen. To add your TV-related opinion, just click on the comments button below.