Johnny TV Gets The Call 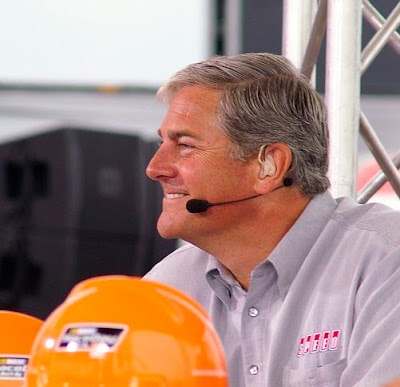 It was only a short time ago that Steve Byrnes made the decision to get off the road and sign-up as the fulltime studio anchor of SPEED's Race Hub series. That left an opportunity for someone to step-in as the host of the network's NASCAR practice and qualifying coverage.

Byrnes left a void that is not easy to fill. His experience in this on-track anchor role as well as his general TV versatility made him a tremendous asset for SPEED. While the network has put several on-air personalities in this role, Friday at Kansas is perhaps the most high-profile TV role since Byrnes departed.

SPEED made it official with the weekly on-air talent assignment sheet. Network veteran John Roberts gets to follow Mike Joy, Rick Allen and Byrnes as being the face of SPEED for all the Friday practice and qualifying shows.

Roberts has been slugging it out in the trenches at SPEED for a very long time. Over the years, he had wrangled Jimmy Spencer and Kenny Wallace, sat in the rain and show on the outdoor SPEED Stage and introduced Wendy Venturini more times than anyone on the planet. Nice to see that hard work pay off with this opportunity.

This is a pretty big statement by SPEED. Roberts starts the day at 1PM ET with Sprint Cup Series practice and comes back at 3PM with the Nationwide Series session. Roberts gets Jeff Hammond and Larry McReynolds for those programs. That should be a good warm-up for the big challenge of the day.

At 4:30PM "Mr. Big Time" strolls into the booth when Darrell Waltrip joins the trio to make it a foursome for Sprint Cup Series qualifying. Waltrip is never shy this time of the year and Roberts is going to have his hands full once "Ole DW" gets wound up.

As if that challenge is not enough, Roberts gets to put a nightcap on the situation with the Nationwide Series final practice at 6PM. This time, it's Kyle Petty and Phil Parsons alongside as his former booth mates are getting ready for the Trackside show at 7PM.

Roberts is pretty well-known for the fact he had to supplement his income when he first started working as a weekend local TV sports reporter in Charlotte, NC. He ran a landscaping business from his garage.

"People got a kick out of seeing me on television on Sunday and then waking up on Monday to find me mowing their lawns," Roberts told the doityourself.com website. Click here to read the entire story about Roberts and his now extensive home workshop.

We will use this post to keep tabs on Mr. Roberts as he navigates his way though many hours of NASCAR TV on Friday. To add your opinion of how SPEED and Roberts are doing, just click on the comments button below. This is a family-friendly website, please keep that in mind when posting.

Thanks for stopping by, it should be fun to watch SPEED go through the day on Friday in both of NASCAR's top series.
Posted by Daly Planet Editor at 10:00 AM 25 comments: