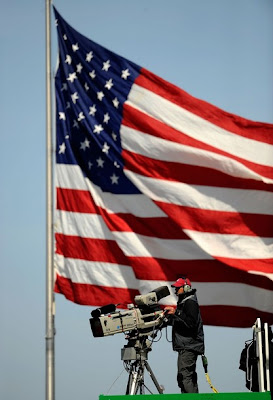 The rain has stopped, the track is dry and NASCAR is ready to try and get to halfway. FOX will be on the air from Martinsville, VA with the Sprint Cup Series at 12PM ET.

FOX has told us that they have kept the Hollywood Hotel at the track. This is perhaps due to the off-week coming up. Normally, this set is off and rolling to the next destination when a race is delayed.

Chris Myers and Jeff Hammond are going to open the show. Mike Joy, Darrell Waltrip and Larry McReynolds will be calling the action. On pit road are Krista Voda, Steve Byrnes, Matt Yocum and Dick Berggren.

The sky is partly cloudy and NASCAR has announced that there will be a competition caution at lap 50. The track will be green and abrasive, so tire wear early on is going to be an issue.

The short and relatively slow laps at Martinsville can be a TV challenge. Changing camera shots and alternating views of the endless laps is the only thing that works from a TV perspective. In-car cams are tough with the short straights and quick corners.

We are going to use this post to host your comments on the live FOX coverage of the Sprint Cup Series from Martinsville. To add your TV-related opnion, just click on the comments button below. This is a family-friendly website, please keep that in mind when posting. Thanks for taking the time to stop by The Daly Planet.
Posted by Daly Planet Editor at 11:16 AM 119 comments: