Update: "Three Wide Life" Gets A Call From Sprint 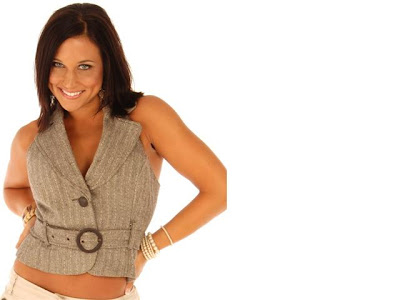 Well, this was supposed to be the opening week of "Ms. Sprint" Monica Palumbo working as the new host of Three Wide Life. Unfortunately, Sprint had some other ideas about her wearing two hats for the last nine race weekends of the season.

Needless to say, Palumbo is not going to step into that role. That is a shame for Palumbo, who seemed to be a good choice with her past TV experience.

Stepping into that role shortly will be Brittney Cason, a Charlotte local and an experienced host and writer. That is Ms. Cason, pictured above.

Three Wide Life goes back into production shortly, so we will keep you updated on when the first new episode hits the air.

Thank you for the earlier comments.
Posted by Daly Planet Editor at 8:07 PM 16 comments:

Media Notes:
Bruton Smith will add lights, but will not re-configure Loudon for 2009. Look for a Saturday New Hampshire night race in the future.
For those asking about Claire B. Lang's Dialed-In show, she is on XM Channel 148 from 3 to 6PM Eastern Time. More news on her Internet access will follow.
For our Canadian readers, TSN2 has just launched on Bell cable bringing NASCAR back.
Jeff Foxworthy is writing an animated pilot for Fox about a dysfunctional NASCAR family. Rumor is that it might replace King of the Hill.
ABC TV rating went up from a 2.9 to a 3.2 for Sprint Cup race from New Hampshire.
TV ratings for the Craftsman Truck Series race from New Hampshire are up 29%.
Tuesday's NASCAR Now will be one hour in length.
Click here for the ESPN Fantasy Racing results simulator. Cool or creepy?

This post will be updated throughout Tuesday. Feel free to comment below.
Posted by Daly Planet Editor at 10:39 AM 24 comments: