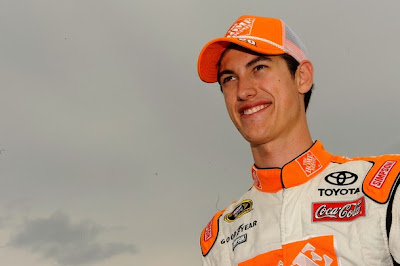 Here we go with a day of practice and qualifying from the New Hampshire Motor Speedway. The week is a strange one, with the Chase drivers doing lots of public appearances and the weather in New Hampshire refusing to cooperate.

Rainy and cold was the forecast for Friday as the TV coverage started at 11:30AM ET on ESPN2. The complete TV schedule is on the left side of this page.

ESPN has the "A Team" on these races of Marty Reid, Dale Jarrett and Andy Petree. Reid has been challenged to handle practice and qualifying coverage for the Sprint Cup Series in his first season in the play-by-play role. NASCAR is a different animal than the NHRA and IndyCar, which is where Reid has been stationed for ESPN these past few seasons.

At SPEED the very familiar Camping World Truck Series TV team is back. Rick Allen, Phil Parsons and Michael Waltrip are joined by Ray Dunlap and Adam Alexander on pit road. This small crew gets a lot accomplished and their ties to the truck series run deep.

The day ends with Nicole Briscoe hosting NASCAR Now from ESPN2's Bristol, CT studios. Then, another episode of Riding Shotgun with Kyle Busch airs. The reactions to this show have ranged from very positive to completely negative. Busch's fiancee certainly steals the spotlight.

Finally, Trackside on SPEED comes along with a rare appearance by a truck series driver. Todd Bodine joins Greg Biffle on the guest list. Bodine takes no prisoners and his disgust with the antics of Kyle Busch in several races this season have been well documented. It should be interesting to see if Bodine lets it fly on this topic or if NASCAR has stepped in to help him "craft" his message.

This topic will serve to host your comment on the Friday NASCAR TV coverage. To add your opinion, just click on the comments button below. This is a family-friendly website, please keep that in mind when posting. Thanks for taking the time to stop by The Daly Planet.
Posted by Daly Planet Editor at 5:04 AM 25 comments: