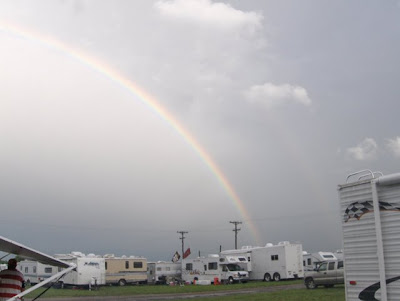 The graphic on the screen said "live" and the location was clearly the Texas Motor Speedway. The time was just a couple of minutes after 7PM Eastern and on-the-air at ESPN2 was host Ryan Burr and NASCAR Now.

On this day, the Nationwide Series cars sat under their car covers as the moisture from the sky continued to fall. This reality went a long way to saving face for both NASCAR and the NASCAR TV partners.

Originally scheduled to get underway at 7:05PM was live Nationwide Series qualifying. Dale Earnhardt Jr., Tony Stewart, Clint Bowyer, Kyle Busch and series regulars like Marcos Ambrose and Bobby Hamilton Jr. were ready to roll. Had the first car pushed off the line on time, it would have been very interesting.

As The Daly Planet pointed out on Wednesday, both practice sessions and the qualifying session for the Nationwide Series at this exciting racetrack were not on TV. They were not live, they were not tape-delayed, and they could not be seen later in an edited program. As they say in the business, Thursday at the track was "dark."

It was Burr who first raised the subject when he started the show by calling it "the Nationwide qualifying edition" of NASCAR Now. Perhaps, word that the entire practice and qualifying sessions were "dark" for the only NASCAR series that ESPN telecasts in its entirety had reached certain levels at both ESPN and NASCAR.

Certainly, Andy Petree appeared from Texas and there behind him was the track with the Nationwide cars on pit road. If not for the rain, the first engines would have been started and the first tires turning on the track. Regardless of the series, the TV value of the top drivers in NASCAR qualifying at Texas is significant.

It was Lead Reporter Marty Smith who took viewer's minds off this problem for several minutes with one of the best interviews of Dale Earnhardt Jr. in quite some time. It should be noted that Smith and Junior are friends, and once Smith asked Earnhardt how it was going over at Hendrick, Junior was off to the races.

In a wonderfully exclusive interview for NASCAR Now viewers, Junior took a very deep breath and just layed it all out on the table. His words about his personal feelings and his new team and car and expectations just flowed. It almost seemed that he was getting a lot of things off his chest and wanted fans to know very clearly what was going on in his life on-and-off the track.

One could not help but laugh when Earnhardt said he "did not know what Human Resources was until this year." It was great to see a smiling and happy Junior opening-up to race fans once again. What an interesting moment for this show.

Andy Petree is having a great season on TV, and this includes his appearances on NASCAR Now. Petree spoke to the value of the Nationwide race in Texas, and the fact that sixteen top Cup drivers would be participating. He pointed to this race as a good challenge for the Nationwide regulars to step-up and go head-to-head with the big boys on a high-profile exciting track.

Burr filled the show with interviews of Clint Bowyer and Jason Leffler from Texas. DJ Copp appeared once again and offered another interesting feature, this time on the updated wheel components that were aimed at helping pit crew members on tire changes. Somehow, his topics are always good.

"We had hoped NASCAR Now would be all about qualifying," said Burr as the cameras panned the soggy speedway. He told viewers that ESPN News would be updating the qualifying if and when it happened no matter how late in the evening. That was a nice touch for a network chasing a story that would ultimately affect their Saturday race.

Thursday at Texas certainly was a learning experience for all involved. The good news is that NASCAR Now continues to be a solid show and the integration of the at-track announcers like Petree is a great feature. This season, the ability of NASCAR Now to go live from the track shows a new level of commitment to the sport.

Look for the issue of "no TV for Texas" to be solved before long, and for ESPN to re-think their approach of not televising Cup practices when their portion of the schedule comes along. Between the COT, the new Toyota dominance and the re-emergence of Dale Earnhardt Jr. fans are going to demand that Cup practice be televised live as it has been for years. The decision should be interesting.

The Daly Planet welcomes comments from readers. Simply click on the COMMENTS button below and follow the easy instructions. The rules for posting are located on the right side of the main page. Thanks again for taking the time to stop by.
Posted by Daly Planet Editor at 7:44 PM 21 comments: