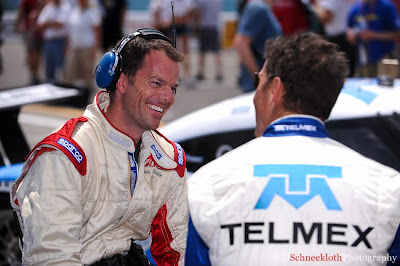 The countdown to TNT is on once again. Kansas this Sunday is the final Sprint Cup Series race for FOX in 2011. TNT comes into town for a six race TV package that features a unique trio in the broadcast booth, original online offerings and lots of network promotion.

To say this is a complete switch from the well-connected Mike Joy, the deeply conflicted Darrell Waltrip and the darling of the press corps Larry McReynolds is an understatement. TNT brings irreverence like FOX brings the party line.

Petty is already a star for SPEED and does a very popular live NASCAR.com video chat from each Sprint Cup Series race. Alexander has been busy trying to get the new Speed Center show dialed-in and Dallenbach has been getting his TV feet wet again in IndyCar.

In a way, the TNT package feels more like folks taking a break from their day jobs to work on summer vacation. McReynolds comes along to be the "race strategy guy." Lyndsay Czarniak, a Washington, DC local TV sports reporter, hosts the pre-race and stays to anchor from the infield with McReynolds.

Unfortunately, Parsons has a tough time working the top series. Between the baggage of his own start-and-park operation and his lack of previous interaction with some of the Cup stars, he was left in a lurch. While several of his "moments" were comical, some were downright embarrassing. Parsons will not be returning.

As the Parsons news broke, it was also made public that this season the TNT online application called RaceBuddy will not have its own pit reporter. That put veteran Jim Noble out of action. Noble had done a great job of holding down the online fort and interacting with fans. Perhaps, he upstaged the guys on the TV side.

Since Parsons was not returning, many thought Noble would get the TV pit reporter job after his hard work on RaceBuddy. Instead, TNT stepped out of NASCAR and tapped SPEED's sports car pit reporter Chris Neville as the new kid on the block. That is Neville pictured above talking with driver Scott Pruett.

Although the news is not official, Neville has already changed his Twitter bio and sent several tweets about his new role this summer for TNT. Neville came up through the racing ranks as a driver starting with go-karts and then moving into various sports car series. He has been working for SPEED for ten years and is a solid TV pro.

Neville has worked on ARCA telecasts, but is not a NASCAR TV veteran. This is not necessarily a drawback, as Czarniak has succeeded on TNT using her news skills and personality on the air. Neville may be the breath of fresh air this package needed on pit road.

TNT was caught in a lurch when ESPN suddenly made an announcement about using the side-by-side commercial format for the second half of all Chase races this season. It has consistently been TNT and Turner Sports pushing new innovations both on TV and the Internet for the last several years in NASCAR coverage.

Other than the "Wide Open" coverage at Daytona, the other five TNT races this summer will have the standard full-screen commercial breaks. Daytona will again have the same type of split-screen approach that some viewers love and some really hate. Advertisers get additional time on the screen and while the cars can always be seen, there is a lot of sponsor content rolling by.

There will be an official announcement on all of this from Turner shortly. This summer package rolls by quickly and begins to be overshadowed by the approaching ESPN coverage once the July Daytona race is over. In the meantime, FOX gets one more try this weekend in Kansas to show us some racing.