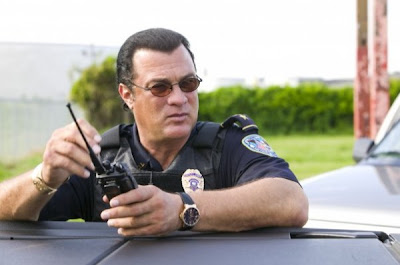 This is the second week of honoring radio veteran Pete Pistone with our review and your comments of the TV telecast. This week, the Sprint Cup Series was racing at the Texas Motor Speedway on ESPN. It's time for the TV Police.

The pre-race show was certainly interesting. There were several long recorded features in the one hour program. One reviewed the military service of veteran owner Bud Moore and another used the Sports Science guys to detail horsepower and how an engine works.

Allen Bestwick led Brad Daugherty and Rusty Wallace through this hour with an emphasis on the three Chase leaders. It was a pumped-up Wallace and Daugherty who responded with high volume and lots of enthusiasm but not much more than that.

The highlight of this program was perhaps when Wallace explained that the monkeys brought in as a publicity stunt by TMS president Eddie Gossage had pulled a piece of paper out of Wallace's pocket and eaten it. "That was my Toyota contract!" he said.

ESPN has stuck with the same style of coverage for the entire Sprint Cup Series season. After Marty Reid, Dale Jarrett and Andy Petree previewed the race, the three moved into concentrating on Jimmie Johnson, Kevin Harvick and Denny Hamlin. Some may argue that once again the real emphasis was simply on Johnson.

Marty Reid immediately moved to watching the TV monitors in the booth as the endless tight shots from the director again forced fans of teams outside the top ten to simply follow the ticker on the top of the screen for updates. As usual, only a handful of cars would be featured.

The TV team missed several incidents on the track and again the delay between what actually had happened and what was being shown on the screen was substantial. Perhaps the most interesting was the incident between Jeff Gordon and Jeff Burton.

Reactions ranged from Andy Petree saying quickly that Burton did it on purpose to Brad Daugherty celebrating the fact that the two drivers had briefly mixed it up after the incident. Burton's later explanation painted Daugherty as a fool.

In the later portion of the race, Hendrick Motorsports swapped pit crews with the #24 team now servicing the #48 car. This threw the TV team for a loop. No one could gather any facts, present any compelling pictures or even put this move into a historical perspective. It took Dr. Jerry Punch stepping out and getting involved to finally present some facts that put the move into context.

Bestwick often was used coming out of commercial to sort things out for the viewers before returning the telecast to Reid. It is very unfortunate that Reid is slaved to following the confusing and often misleading pictures from ESPN. Time after time, cars would appear on screen that had never been seen before.

As the race progressed, the classic situation continued. ESPN had to concentrate on the Chase and exclude the race. Fans of teams not in the Chase and not in the top ten were upset that their teams were never mentioned. This included Dale Earnhardt Jr. and other popular drivers. As we have said before, they simply cease to exist.

The TV pictures were fantastic as was the audio. ESPN has been having a great year in terms of television engineering. Also, thanks to Dr. Jerry Punch, the pit reporters played a key role in this telecast instead of being relegated to the background.

We all know the problems ESPN has been experiencing due to a variety of reasons. It's just frustrating that with declining interest and falling ratings this race was not used as an opportunity to bring some change to the TV telecast format.

There are only a handful of races left, so give us your comments on what you thought of this race telecast. To add your opinion, just click on the comments button below. This is a family-friendly website, please keep that in mind when posting. Thanks for taking the time to stop by The Daly Planet.