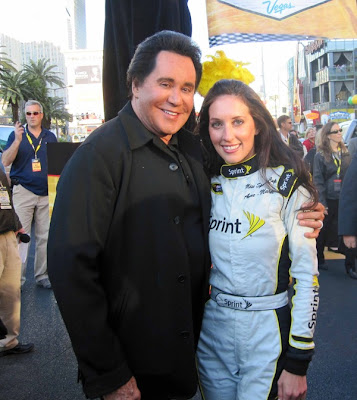 This should be a fun night. SPEED has a NASCAR banquet doubleheader that is actually the post-season festivities for all three of NASCAR's top series.

First up is the combined Nationwide and Camping World Truck Series banquet beginning at 7PM ET. This show was recorded live during the banquet in Miami several weeks ago and post-produced for airing.

The second show is the feature at 9PM. SPEED got its hands on the Sprint Cup Series banquet just several weeks ago. Frank Caliendo will host the event. Krista Voda and Mike Joy will handle the awards presentations on the stage. Steve Byrnes and Jeff Hammond will host the event on air for SPEED.

Brooks and Dunn will open the show with a special musical number. David Gray and the string quartet Escala will also perform. John Pinette will be the comedian.

This final live blog of 2009 is ready for your comments on the two banquets on SPEED. To add your TV-related opinion, just click on the comments button below. This is a family-friendly website, so please keep that in mind when posting.

Thanks again for taking the time to stop by and help us with your opinion!
Posted by Daly Planet Editor at 6:41 PM 165 comments: 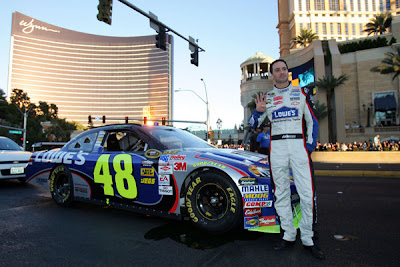 After an amazing chain of events that saw the Sprint Cup Series banquet switch TV networks at the last minute, Friday night will bring a NASCAR banquet doubleheader to SPEED.

NASCAR consolidated the Nationwide and Camping World Truck Series banquets into one evening. The festivities were recorded by SPEED and will be shown in an edited version at 7PM ET Friday night. This is the first part of the doubleheader.

In the past, these edited programs featured short chats in an informal setting on the stage with SPEED personalities Krista Voda and Rick Allen. The drivers have a couple of minutes to plug their sponsors, relay their thanks and maybe have a laugh. It should be interesting to see how SPEED chooses to present this newly combined banquet in a two-hour TV program.

NASCAR moved the Sprint Cup Series banquet from New York City to Las Vegas, NV this season. Amid the reasons was a desire to make this entire multi-day event more fan friendly. Certainly, one part of the problem was that ESPN offered only the small ESPN Classic network on which to carry the banquet live Friday night in primetime.

Just weeks ago, NASCAR suddenly announced that live coverage of the banquet ceremony was moving to SPEED. This satisfied three issues. One, it put the live banquet in front of a larger audience than ESPN Classic. Two, it got ESPN out from under the problem of showing the final seventeen races and then seeming to neglect the post-season official crowning of the champ. Finally, it kept the NASCAR TV product on a network that was familiar to the fans.

Needless to say, SPEED called all hands on deck and sent a good-sized contingent to Las Vegas. Steve Byrnes will act as the TV host handling all the SPEED on-air duties. He will be joined by Jeff Hammond. This gives SPEED a duo who can keep things smooth on the air and take the fulltime focus away from the awards stage.

Krista Voda and Mike Joy are going to handle the racing-related awards and presentations on the stage during the telecast. These two are wonderful picks to deal with all the live moments and negotiate this telecast through the myriad of awards and sponsor mentions.

Veteran comedian Frank Caliendo is going to be the celebrity host. In the past, this position has been rough to handle. NASCAR fans just plainly do not take to Hollywood types who make bad racing jokes and mispronounce names. Caliendo seems to be the type who can roll with the punches and his previous appearances on Fox Sports have been fun to watch. This has potential.

John Pinette has been very funny in the past as the comedian at several NASCAR series banquets. He will also appear on Friday night. Pinette seems to work very hard on preparing his background material, so hopefully his comedy presence will be a positive one for the sport at a time when laughs are sometimes hard to come by.

NASCAR announced on Thursday that Brooks and Dunn will be opening the show with their song "Only in America" as a tribute to NASCAR fans. Musician David Gray and the string quartet Escala will also perform during the evening.

The Brooks and Dunn appearance will be a part of a larger fan tribute that will also include the voice of TV legend Ken Squier. He will anchor a video titled "The Spirit of the Fans" that will hopefully work to show those who stuck with the sport during this rough patch that NASCAR has not forgotten them. Starting the show in this manner may go a long way toward patching things up.

TDP will offer a live blog post for both of the TV shows on SPEED beginning at 7PM. Please join us to offer your comments as the evening goes on. We will also be live with comments on Twitter at twitter.com/TheDalyPlanet from 7PM to 1AM ET.

In the meantime, perhaps you can share your comments on the topics above including the move of the banquet from ESPN to SPEED and the personalities selected to participate. To add your opinion, just click on the comments button below. This is a family-friendly website, so comments may be moderated before posting. Thanks for taking the time to stop by The Daly Planet.
Posted by Daly Planet Editor at 4:30 AM 13 comments: