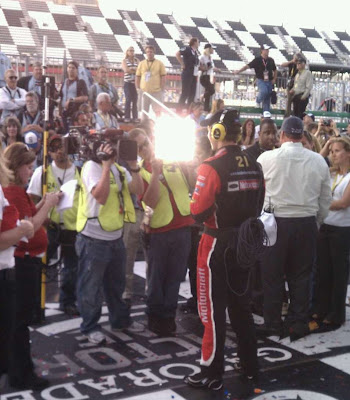 The irony of the quick interview of Trevor Bayne by FOX's Krista Voda in Victory Lane was made clear once the race telecast was over. Actively or passively, Bayne subsequently appeared on more media outlets than any Daytona 500 winner in history. He was a media dream.

After handling the liveshots for various TV shows in Victory Lane once FOX was done, Bayne then worked his way through the Victory Lane show on SPEED and NASCAR Now on ESPN later Sunday night. By then, it was clear that the camera just loved this driver.

Monday morning saw the Daytona 500 highlights and soundbites from Bayne featured on cable news networks, local TV stations and ESPN's various channels. Still smiling, Bayne then handled the satellite interviews from Daytona USA as the 500 car was put on display.

The next stop was ESPN and a turn in the company car wash. That is the current term used to describe a person who is whisked through the media giant's TV, radio and online channels in one day and then spit out into the parking lot with a handshake.

Instead of a babbling mess, Bayne walked through the various ESPN programs with maturity and good humor. He delivered a positive message for NASCAR that sports TV viewers had not seen or heard in a long time. Here was a smart, young person who was excited about racing.

Rusty Wallace had some airplane issues and was unable to fly into Bristol for the big Monday one-hour NASCAR Now show. It might have been kismet. Instead, Bayne sat with just host Allen Bestwick and reporter Marty Smith for the entire hour.

This long-form program allowed Bayne to talk about all kinds of diverse issues. It clicked. The always structured Bestwick led him through the topics that race fans wanted to hear while Smith leaned back and brought some outstanding questions from the journalism side of the aisle.

Along the way, Bayne never faltered. He was never mean, never grouchy and never made an on-air joke at another's expense. In speaking with David Pearson by phone on the show, Bayne reported to him that he had followed Pearson's advice and simply tried to be careful in order to finish.

It should be noted here that for once ESPN's SportsCenter put together an outstanding edited feature on the race, Bayne's win and what it means for the sport. Brian Williams of the NBC Nightly News made his contribution with a very nice story on the impact of an outsider and fresh face taking one of the biggest prizes in the sport.

Despite the continuing lunacy of stick-and-ball curmudgeons on shows like Around the Horn and Pardon the Interruption, ESPN in general handled the subject matter quite well and gave the Daytona 500 and NASCAR unprecedented exposure.

The polar opposite of Allen Bestwick is Steve Byrnes. Casual on the Race Hub set in Charlotte, Byrnes used his unique style to have fun with Bayne in an interview taped via satellite from Daytona USA. Bestwick keeps it professional, while Byrnes makes it personal.

Bayne again sold himself, the Wood Brothers, Ford and NASCAR with little effort. His enthusiasm and previous interactions with Byrnes made it clear to SPEED viewers that this was the type of star lurking in the Nationwide Series and looking for a future.

For the race telecast, FOX reported an 8.7 cable rating which translates to 15.6 million homes. That's only one point higher than last season, but there was some interesting data released. Some of Nielsen's top ten metered markets turned impressive numbers.

In Chicago, viewership was up 61%, in New York 32% and in Los Angeles 46%. Needless to say, those are some key markets for NASCAR with tracks and races in two of those cities. Another good tidbit was that ratings started higher from the green flag and then peaked for the finish. That means a whole lot of people stayed put.

NASCAR.com passes along the incredible number of 11.2 million pageviews on Sunday, with 3 million additional pageviews from mobile devices. There is little doubt that the upcoming focus on the sport's media outreach will center on an increased online presence that is user-friendly and driven by video and social media content.

Update: Wood Brothers will be in Phoenix and Bayne will run in both series. Thank you for the information.

For one rather glorious 24 hour period, NASCAR got the kind of national media spark that it cannot buy, create or command. It should be very interesting to see how FOX, ESPN and SPEED handle the transition of Bayne back into mediocrity and what each network does to try and keep the NASCAR ball rolling in the right direction.