NASCAR And NBA Set To Wrestle For Media Attention 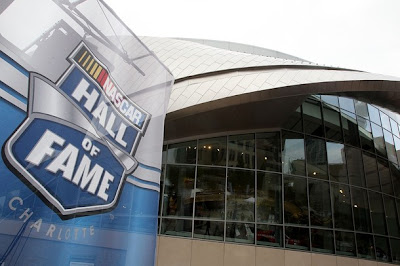 So often it seems that when something special is about to happen for NASCAR, some other issue pops-up and steals the media spotlight. The sport has dealt with the Olympics and World Cup Soccer. Now, the NBA comes calling.

LeBron James is a free agent at one minute after midnight, so Thursday should be dominated by the national sports media playing out every single scenario possible for his future. Expect ESPN's coverage to rival that of the annual Brett Favre retirement/comeback watch.

Amid this clamor the Sprint Cup and Nationwide Series cars will be turning laps at Daytona. The focus of the day, however, will be something that happens a little later.

SPEED is offering an 8PM ET edition of Race Hub with liveshots from the NASCAR Hall of Fame and the speedway in Daytona. It's time to announce the second group of nominees for the Hall of Fame. 25 individuals will be included on the list.

Krista Voda has been doing a super job hosting the new one-hour Race Hub shows this week. She will anchor the Thursday coverage from the SPEED Studios in Charlotte, NC. Mike Joy and Ken Squier will be downtown in that same city at the Hall of Fame. They will also have a live audience on hand.

Meanwhile, the "fun bunch" of Steve Byrnes and Kyle Petty will be in front of the fans at Daytona on the SPEED Stage. If there was ever an interesting place to reveal the new Hall of Fame nominees, this is it. Well, that is exactly what is going to happen.

NASCAR's VP of Competition is Robin Pemberton. He will do the honors of reading the names of the nominees. Byrnes and Petty know Pemberton very well. Long before Pemberton became a NASCAR head honcho, he was a colorful crew chief who enjoyed interacting with the television folks. Permberton's dry sense of humor mixed with Byrnes and Petty could make the official announcements rather interesting.

So, Voda hosts from the network HQ while Joy anchors from the Hall and the Daytona trio read the nominees from the SPEED Stage in front of the fans. That is a good amount of talent and manpower devoted to this effort. SPEED is also taking the time to re-air this show at 11PM ET and Friday morning at 8AM.

It's doubtful that we will know where LeBron and the other free agents have landed by Thursday night. While the mainstream sports media may be in an NBA frenzy, at least NASCAR fans will know exactly who is on the next list for the biggest honor in the sport. SPEED has proven this season to be on top of the NASCAR news. Let's see just how far this NASCAR information travels on other media outlets.

We invite your comments on this topic before, during and after this program has aired. To add your opinion, just click on the comments button below. This is a family-friendly website, please keep that in mind when posting. Thanks for taking the time to stop by The Daly Planet.
Posted by Daly Planet Editor at 5:00 AM 23 comments: