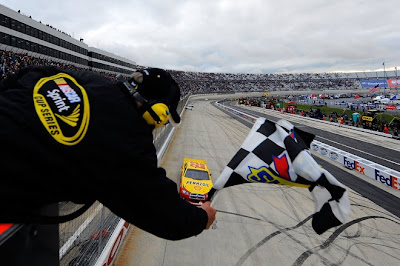 ESPN came into Dover with the challenge of getting the story of the Chase across to fans. Instead, the theme selected was the supposed tension between crew chiefs and drivers. Needless to say, once the race started, nothing like that ever happened.

Nicole Briscoe has her hands full with Brad Daugherty and Rusty Wallace. From the Infield Pit Studio she hosted an hour that mixed pre-produced features with interviews and comments from her analysts.

Marty Smith interviewing Denny Hamlin was the high point, but the Rusty and Brad show was the low. Rusty told viewers Chad Knaus and Jimmie Johnson might be done while Brad continued to tell everyone that everything was just fine. Two team owners on TV unable or unwilling to say what was really on their minds.

Allen Bestwick worked like a dog to keep Dale Jarrett in this race. He constantly asked questions that got Jarrett talking during lulls in this uneventful race. Luckily, Andy Petree was solid once again and shared his strategy opinions freely.

The four pit road reporters were more aggressive, chasing comments from crew chiefs after critical pit stop decisions like the old days of classic NASCAR on ESPN. It would really help the telecasts if the pit road gang was allowed to do updates rather than Briscoe, Wallace and Daugherty.

ESPN's signature "hyper-tight" coverage was forced to loosen up as the cars raced on the ragged edge and restarts resulted in packs of cars racing for position. The director worked hard to stay ahead of the pack and the vast majority of the race featured cars racing toward the viewer. That certainly makes a difference.

As things settled down on the final fuel run, Jarrett and Petree did a good job of keeping viewers informed of the dynamics playing out on the track. Bestwick is excellent and directing traffic and the information gaps left by Marty Reid are a thing of the past.

It was a clean finish with the camera showing the top cars coming across the line. It was a small crowd on a dreary day and there were lots of other pro sports on TV at the same time. The best news is that the rain held off and the race finished without any significant delays.

This post serves to host your opinions on the ESPN coverage of the Sprint Cup Series race from Dover. To add your comments, just click on the comments button below. Thanks for taking the time to stop by The Daly Planet.