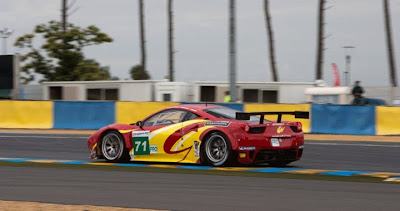 Nothing brings the disparity of what is vs. what could be more into focus than these next six Sprint Cup Series races. TNT and Turner Sports have been pushing the online video envelope over the past several years, but this summer is going to be off the chart.

Monday the details began coming out about the TNT races, but the real item that grabbed hardcore fans was the Internet expansion. FOX just completed its portion of the Sprint Cup Series season without any online video and it looks like the final seventeen races on ESPN will be the same way.

Meanwhile, this summer Turner will use the NASCAR.com website to launch a newly renovated RaceBuddy application. Once again provided free of charge, here are the details from the media release:

This season, fans can choose from a total of ten camera views, twice as many as last year,including two Mosaics. Eight individual camera angles include four In-Car Driver Cams, up from one cam last year, two Battle Cams highlighting head-to-head competition between drivers, a Backstretch Cam and a Pit Road Cam. The two Mosaic Views allow fans to view four streams at once. Returning features to the site include the DVR Function, an Enhanced LIVE Leaderboard and RaceView’s position tracker.

The availability of these additional video resources is coupled with a live online chat that can integrate users from all the major social media sites. It should be interesting to see the new layout of the page and just how many fans come to the site for RaceBuddy chat.

There are a couple of details to be discussed. There will be no live pit reporter assigned to RaceBuddy this season. That took away from the live TV broadcast. TNT will instead continue to be interactive during the races on Twitter, Facebook and the NASCAR.com website.

A couple of big additions will be having a second battle-cam. The biggest complaint we get at TDP from fans is that the Sprint Cup Series networks stay at the very front of the pack with coverage and do not look for the best racing on the track.

Battle-cam lets online viewers watch endlessly the best battles on the track regardless of position. Now, there will be two different cameras each chasing the best battles throughout the entire field. That is really going to make a big difference.

Turner got great feedback from last season about carrying the in-car cameras with both video and audio from the team radios on RaceBuddy. To have the total increased to four in-car cams for every race is going to give fans a lot of choices.

The idea of RaceBuddy is to be an online addition to the TV race coverage. This is not the TV race streamed online, but a tool provided free of charge to enhance the telecast. It's a really interesting concept that has been met with very positive reaction by fans.

Like everything these days, technical issues chase RaceBuddy around. Prior to this weekend's race, we will offer an updated list of preferred browsers for this application and whether or not iPad users will be able to access the live video this summer.

This is not a smart phone app. Sprint has its own updated version of that for the sport as a part of the title sponsorship. Lots of video is made available, including shows from SPEED on the weekend and live scanner audio.

For those of you asking about the TNT on-air team, here is the information:

TNT returns its marquee announce crew with analysts Kyle Petty and Wally Dallenbach joining play-by-play announcer Adam Alexander in the booth. Veteran reporters Ralph Sheheen, Marty Snider and Matt Yocum will be joined by Chris Neville, a ten-year veteran motorsports reporter, on pit road. In addition, Lindsay Czarniak will once again host the network’s 60-minute pre-race show, with Petty and McReynolds joining her on the TNT rig along with special guests each week.

The challenge for fans this season is going to be getting all the available technology sorted out before the TNT races. Some folks suggest using two computers and one TV, while more sophisticated types reminded us that RaceBuddy can be plugged into most HD-TV's to really get the full experience.

It is going to be interesting to get your opinion after the Sunday Pocono race of just how much this online content will change the way you "watch" the race at your home. Please feel free to offer your comments on this post about TNT and RaceBuddy.