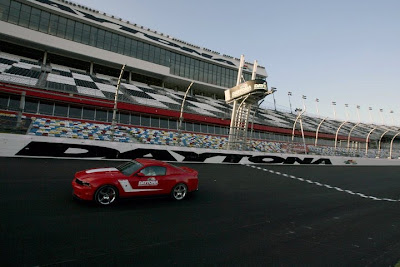 Following one of the most tumultuous off-seasons in years, the survivors of NASCAR's sponsorship woes are finally heading to Daytona. It's testing time for the Sprint Cup Series teams.

SPEED is going to handle all the activity and will split the morning and afternoon sessions between online and cable TV coverage. Thursday through Saturday at 9AM SPEED will stream coverage on the SPEED.com website. There is no charge and the video stream should open on portable devices as well.

Rick Allen and Jeff Hammond will be up in the booth talking about the on-track happenings while Wendy Venturini and Bob Dillner will be covering the ongoing stories in the garage area. There should certainly be a lot of things happening live.

After lunch, the 1PM sessions will feature the big boys up in the TV booth on SPEED. Steve Byrnes, Darrell Waltrip and Larry McReynolds will be talking a lot about the new rules package and what effect it will have on the "tandem racing" we saw last season. Hermie Sadler and Randy Pemberton will be the reporters.

John Roberts will be hosting all of SPEED's coverage and should provide a solid presence from the infield, even without the SPEED Stage. Daytona weather is always changing and the current forecast does contain the threat of rain and also changes in temperatures during testing time.

NASCAR has made it very clear that the newest set of rule changes in radiators and cooling systems is clearly aimed at stopping the two car "tandem racing" that fundamentally alters the dynamic of racing as we knew it. Teams adapted quickly to this style and poured resources into this type of racing.

SPEED returns after a hiatus that saw the NASCAR news continue at a frenetic pace on social media and racing websites. Unfortunately, the only designated motorsports-themed cable TV network stepped aside and despite one off-season special following Kurt Busch's departure from Penske, there was silence on SPEED where NASCAR was concerned.

One week after the testing coverage is over, SPEED returns the Monday through Thursday RaceHub program anchored by Steve Byrnes. Right now, the original air time is still listed as 6PM but perhaps the network might reconsider and move this important show back to the original 7PM ET timeslot.

West Coast viewers used to get the RaceHub repeat at 9PM Pacific, but SPEED also changed this time in mid-season. The 11PM timeslot meant many viewers had to record the show and try to catch it a day later. Returning the re-air to 9PM Pacific would certainly help the series and the sport at a time when both need it.

Thursday really starts the NASCAR TV season, this will be our sixth since opening the TDP blog. Next up is the Hall of Fame induction and then things get underway in Daytona for real. We will keep updating the media listings on the left side of this page.

We also encourage you to take a moment and join Twitter. This easy to use and free service will put information from your favorite drivers, teams, tracks and media personalities right on your computer or phone. You don't have to type anything or disclose any information. It's just a great way to stay plugged into the NASCAR scene with the most up to date information. We are at twitter.com/thedalyplanet.

There will be a live blog open for testing each day, but please feel free to add your TV and media-related comments to any of the topics mentioned above. To add your opinion, just click on the comment button below. As always, thanks for stopping by.