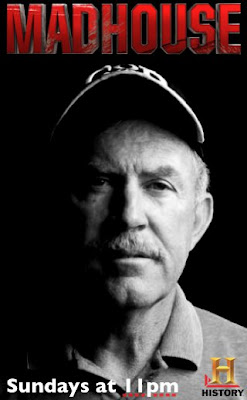 The original reality series Madhouse on the History Channel has finished season one. Whether or not there is a season two depends on who you ask.

The 2009 summer racing series for the NASCAR Modifieds at Bowman Gray stadium in Winston Salem, NC was the subject of this TV project. What emerged from hundreds of hours of footage divided the fans and sparked a lot of conversation.

The TV formula was pretty simple. First, pick some drivers to profile. Then, mix staged reality footage recorded away from the track with the actual racing footage from the summer. The series also had a narrator to tie it all together in the form of a local radio DJ who read a script created by the producers.

After starting the season airing at 10PM on Sunday nights, the series was moved to 11PM where it remained to the end. It was a tip-off that things were perhaps not going so well in Madhouse land. The reason was pretty simple, the show was the exact same thing every week.

Click here for the official History Channel website about the series. Junior Miller, pictured above, hated everyone and was the villain. The Myers brothers were the good guys and the other drivers simply made up the supporting cast. Wives, diners, dogs and even rental trailers provided staged situations to create content. TV guys call that "scripted reality."

Click here to visit the Facebook fan site for Madhouse. There are a lot of fans of the show who enjoyed what they felt was a realistic portrayal of short track racing in the south.

Reviewing the Facebook comments over the past couple of months has revealed an interesting mix. Some fans follow the series like a story, watching the characters and the relationships between them on and off the track. Other viewers relate to it as a sports event, with the off-track content serving to build the on-track drama.

One running theme during the series was violence after the races. From the first episode to the last, the potential for a fight in the pits was always an important element. Here is a preview of the final episode from the History Channel Facebook moderator:

Starting to get geeked up for this weeks episode. The pot finally boils over! The Showstopper has taken all he can take and its time to open up a can of whoop ass! Who do you think Chris Fleming is going to put that hay-maker on? Think it lands? Who would you like to see that hammer dropped on?

Needless to say, the episode ended with a good pit brawl as previewed. The lingering issue is whether or not it happened because the TV cameras were there. There was a lot of jawing and nervously glancing at the camera crew right before the festivities. In fact, it was clever video editing that allowed Mr. Fleming to appear to suddenly charge his rival like an angry water buffalo.

The result was the stereotypical redneck fight with lots of wrestling and torn t-shirts. The brawl even featured a miscellaneous female who appeared from nowhere to get a swift kick in to the ribs into one of the participants.

It certainly was curious that the big fight featured two of the lesser TV characters. This left the door open for continuing tension between the Myers and Junior Miller for 2010. All of that brings us to the big question.

There has been official silence from The History Channel on a season two. On the network's own website chat, fans have offered that driver Burt Myers has said the series is not returning. Other postings included reports of Bowman Gray PR staff saying no TV this summer and the original TV production company saying they will not be back for year two. At this point, things do not look promising.

Madhouse was an interesting TV project that featured real racing. The production company and the network chose to create a reality formula that echoed lots of the other series now on the revamped History Channel. Ax Men, Pawn Stars and American Pickers continue to feature people who have unique interests, just like the drivers on Madhouse.

In real life, the racing begins again on April 24 at the stadium. Regardless of the TV issue, fans will pack Bowman Gray once again for some weekend fun at the races.

As we close out this topic, perhaps you could share with us your feelings about how you feel the sport and the personalities involved were portrayed in Madhouse. Make sure to tell us how you watched the series, if you stayed up to see it or recorded it to meet your own viewing schedule. If there are other elements you felt strongly about, feel free to raise those issues.

To add your opinion, just click on the comments button below. This is a family-friendly website, please keep that in mind when posting. Thank you for taking the time to stop by The Daly Planet.
Posted by Daly Planet Editor at 7:00 AM 27 comments: