NASCAR Fans Are Freaking Out About HDTV 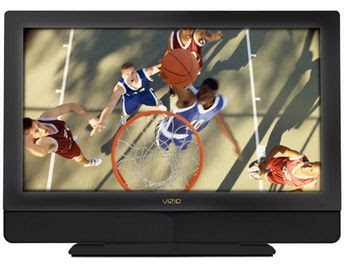 Run for the hills! The end is near! Those mean "TV people" are going to make you pay thousands of dollars to see NASCAR in High Definition next season.

Well, HDTV is always good for scary headlines in the newspapers, but for sports fans there is very little to worry about. In fact, the future of HDTV and free sports on TV is about to blossom.

Lots of questions have been coming our way about HDTV since SPEED announced it will be changing over to HD throughout 2008. Many NASCAR fans are confused about all the things that are being said and heard in the media. Actually, its pretty simple.

Let's first talk about those of you who still receive local TV stations over-the-air. That's right, you are the few proud remaining members of the "TV antenna on the roof" club. In today's world, your club is about thirteen million homes in a universe of over two hundred million TV sets.

Your local TV station transmits over-the-air in an old style "analog" signal that has been the standard since TV began. That will end by February of 2009, which is the timeline set by the Federal Government for TV stations to change over to digital broadcasting.

Just like rotary phones that suddenly could not dial on the new digital phone systems, the same is true for your good old four hundred pound RCA TV set from 1984 sitting in the corner of the den. Take a deep breath, and make it a nice planter.

While there is a converter that can make a digital TV signal work on your analog TV, what is the point? This technology is here to stay, and is now priced in the four hundred dollar range for an HDTV set with a tuner capable of receiving over-the-air signals. That last part is going to be the interesting change for the future.

For those of you with cable TV and no antenna on your roof, only one thing changes. Your cable system will slowly start to offer the same cable networks you watch now in HD. These side-by-side broadcasts will allow you to compare the standard cable signal with HD. As you will see, format of the picture is wider and resembles a movie screen. The big change comes when you step-up and get your first HDTV set.

Then, as many of my friends have said, there is no going back. The HDTV picture is amazing, and the new "aspect ratio" of the TV is easy to get used to watching. Combined with the stereo signal delivered on most live TV sporting events, this new package is a big improvement over the previous way of watching sports on the big screen.

Cable watchers who choose not to buy a new set for 2008 will still be able to watch all the NASCAR TV events and programs, buy why not invest? Before you start telling me that money is tight, let me clue you in on a little secret that HDTV brings.

When your local station begins to transmit in HD, there is a new wrinkle that many of them are doing with great success. They can now provide to your TV over-the-air and free of charge multiple digital channels that come in clear as a bell. How about that for an interesting twist?

Remember the early days of cable TV when we had the famous "A/B switch" behind the TV set? "A" got you the cable input for those channels, and the "B" got you the over-the-air stations. Now, with HDTV, the same thing lives once again, and there is a good reason why.

Your local TV station is going to be able to send as many as four digital channels to your TV set over-the-air. As someone who has seen this technology, let me tell you that the picture is awesome and the fact that it is free also opens-up a lot of possibilities for the future.

Consider this, if you live in a market with five good TV stations, and they each decide to deliver four "sub-channels," you just got twenty free channels of digital television with no charge other than buying your HDTV set. Needless to say, this possibility has the "pay TV" guys scrambling.

What you see right now are companies like DirecTV and HDNet offering HD signals to your home by satellite dish at very low cost. Cable companies like Comcast and Time Warner are also scrambling to add HD network feeds to their line-ups to keep their product attractive. In the blink of an eye, the power has begun to shift back to over-the-air TV stations. Isn't that interesting?

As a consumer, you will soon have multiple HD channels over-the-air from your local TV stations, cable networks converting to all HD, and several new "HD only" networks popping-up on your cable TV line-up.

All of this should be enough to invest in a starter HDTV set, and I am told prices will be at their lowest in the week after Christmas. There are good information pages all about HDTV on the web at the WalMart and Circuit City websites. The bottom line is, shop around. Prices on this technology are continuing to fall.

Don't make it more complicated than it is. If you are a NASCAR fan, get an HDTV set that meets your demands for viewing and also meets the demands of your wallet.

The Daly Planet welcomes comments from readers. Simply click on the COMMENTS button below, or email editor@thedalyplanet.tv if you do not wish to be published. Thanks again for taking the time to stop by and leave your opinion.
Posted by Daly Planet Editor at 12:01 PM 52 comments: