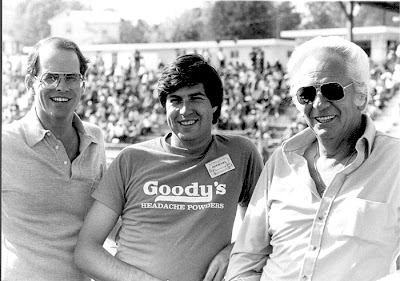 You might not recognize NASCAR VP Jim France on the left, or the late veteran New England racer and track promoter Ed Yerrington on the right. Chances are, however, you absolutely recognize the young man in the center of the picture.

No matter how you slice it, Mike Joy is one of the best-known NASCAR television personalities in the nation. There are plenty of reasons why.

Mike and I share the small town of West Hartford, CT in our respective histories. I graduated from Northwest Catholic, and Mike from Conard High right down the street. He went on to the University of Hartford, and then Emerson College in Boston, one of the top broadcasting and communications schools in the nation.

It's a long road from the PA Announcer at Riverside Speedway in Agawam, MA to the top NASCAR play-by-play position on TV today, but Joy has made the most of the journey. Older fans remember his years working for MRN, and his TV appearances for CBS as a pit reporter for the Daytona 500.

Moving to the play-by-play position, Joy anchored the first NASCAR race televised by ESPN and then years later, did the same for TNN. He called the NASCAR events on CBS, including the Daytona 500, and expanded his resume by covering Formula One for several seasons on Fox.

In February of 2001, the stars seemed to align when NASCAR on Fox hit the airwaves and took the nation's NASCAR fans by storm. The New York Times wrote "every TV motorsports race team should be measured against Fox's Mike Joy, Darrell Waltrip, and Larry McReynolds for pure intensity."

There are also some facts that most fans might not know about the Chicago-born Joy. He has driven in the 24 Hours of Daytona and won SCCA races at Lime Rock, Watkins Glen, Loudon and Pocono. He is a former Vice President of the National Motorsports Press Association, and even served a couple of elected terms on the Windsor, CT town council.

Now comfortable in the Lake Norman area of Greater Charlotte, Mike has been kind enough to give The Daly Planet readers an early Christmas present...his time.

He said he would be happy to field your questions about TV, NASCAR, racing, or any other topic that you feel would be appropriate to ask a veteran media personality. This opportunity does not come around very often, so my advice would be to focus on one topic, and make your question count.

Update: The Mike Joy mailbox is closed, the answers are being put together, and will be appearing shortly. Thank you for all the great questions.

His answers will appear in an article that will be posted on Friday evening. All we would ask is that you review the rules for posting on the right side of the main page before asking your question. Multiple questions in the same posting have not had a very good track record of being answered.

It has been a long year of very hard work putting The Daly Planet together, and I can't think of a better way to head into the Christmas break than by having Mike Joy stop by.

So, Merry Christmas from all of us and here is our little present to you. Ask NASCAR On Fox's Mike Joy the one thing you were always curious about, and come back Friday for your answer. Good luck!
Posted by Daly Planet Editor at 11:45 AM 50 comments:

The email from ESPN was very brief. It simply said there were no plans to air any NASCAR "content" over the winter.

A quick check of the SPEED schedule finds the one hour SPEED Report, where recaps of various NASCAR issues are offered from a news perspective. That is pretty much the extent of SPEED's off-season NASCAR "content."

Over at TNT, every shred of NASCAR "content" is gone from the network. It was gone the second that the final race of the "summer six pack" ended.

In the old days, one might understand that the official "NASCAR TV partners" would not have an interest in re-airing "old" programs or creating retrospective shows right after the NASCAR season was done.

The networks believed that the NASCAR fans had simply had enough, and were "done" until February. They could not be more wrong.

NASCAR TV is alive and well and living on the Internet. With the simple click of a mouse, fans can re-live almost any race and re-visit almost any moment of the 2007 season.

While ESPN, SPEED and NASCAR Images are deep into their corporate denial, this situation is perhaps the worst possible nightmare for the cable TV networks and NASCAR's own production company.

Only several weeks after the three banquets signaled the official close of the season, fans turned their time and effort to the Internet...with incredible results.

With no big cable TV bill, no pre-set program schedules, and absolutely no user rights fees, a single broadband Internet connection into a home computer has made cable TV almost obsolete.

Back on April 22nd, we offered a column entitled "NASCAR Fans Turn To Internet As TV Networks Fail To Deliver." You can read the entire column by clicking on the title.

The idea resulted from a fruitless search of the cable TV networks for any kind of NASCAR highlights the day after a Saturday night race. Then, while writing the column on my personal computer, I just typed "NASCAR Phoenix" into my Google video search engine and entered a whole new world of NASCAR TV.

My highlights were delivered on YouTube.com already edited and voiced-over courtesy of a man named Joe Foster. Other NASCAR video offerings showed whole chunks of the race, and repeated the TV network coverage with commentary included. It was amazing.

Today, just by typing "NASCAR 2007" into YouTube, there are almost three thousand results. Simply typing the word "NASCAR" to see all the online content results in a mind-boggling twenty-nine thousand responses. They range from amateur editors who recap the season to compilations of wrecks or a certain driver's year in review.

Countless other Internet sites from Yahoo! to individual MySpace pages have gotten into the NASCAR TV act by hosting all types of video projects made from the very television footage that NASCAR Images guards like Fort Knox when TV producers come calling. Yahoo! Sports alone has over one hundred NASCAR videos online.

This is a very dangerous time for the NASCAR TV partners, and here is the reason why. This three month period is the first "off-season" since the new NASCAR TV contract began. Needless to say, many fans feel that they were "under served" by the efforts of this NASCAR TV "gang of four."

With the continued reluctance of NASCAR and its TV partners to adapt the side-by-side TV commercial format, more and more fans are using their DVR's, TiVo's and computer hard drives to record the races and then skip through the myriad of commercials and promos. In essence, the "thrill" of watching live racing is being slowly removed by the TV networks themselves.

Ultimately, NASCAR races become no more than tape-delayed highlight reels, and completely lose the thrill of the live excitement and the breath-taking speed that brought the sport to the TV forefront to begin with. What an interesting situation.

Over at Jayski.com, the ESPN NASCAR videos sit frozen in time. David Spade from the Cup Banquet. The slow parade of Chasers in their show cars creeping through New York's Times Square. Jimmie Johnson with Kenny Mayne. The story tells itself, ESPN has moved-on to other sports that are still "in-season."

When February comes around, the danger is clear. What is going to be the appeal for the fans to return to more of the same bad TV? Brent Musburger at his podium. Suzy Kolber and Brad Daugherty talking basketball. Only seeing the winner finish the race. A tired Dave Despain on INC reading his tired script. NASCAR Now...still in Connecticut.

In 2008, the "TV boys" will have to present a very strong case for NASCAR fans to give up their NASCAR.com and YouTube and Sirius/MRN/PRN habits. With NASCAR.com offering all the races online, YouTube offering an almost instant "turn-a-round" of the highlights, and online radio offering live race commentary and talk, where do ESPN/ABC, SPEED/Fox, and good old TNT fit into the picture?

If the pressure was on the NASCAR TV partners and NASCAR Images in 2007 to offer an exciting view of the sport on TV, imagine how much more there will be after lower TV ratings, angry fans, and an exasperated sanctioning body.

Meanwhile, ESPN Classic is on-the-air right now with outstanding December fare like the 1995 Peach Bowl and the 2005 World Series of Poker. To add insult to injury, that network is just beginning a look back at classic NHRA races of the past. 11AM Eastern Time...for your DVR.

Brain France recently mentioned SPEED as a TV partner that he would like to see develop more original programming with his production company, NASCAR Images.

Instead, this off-season SPEED has hidden behind endless re-airs of American Thunder, PINKS, Unique Whips, Redline TV and the classic Super Bikes...where no one wears their helmet while "stunting."

The Jayski.com countdown clock to the Daytona 500 says 60 days. That's two more months for millions of NASCAR fans to get even more...computer literate.

The Daly Planet welcomes comments from readers. Simply click on the COMMENTS button below, or email editor@thedalyplanet.tv if you wish not to be published. Please review the rules for posting on the right side of the main page before adding your comment. Thanks again for taking the time to stop by.
Posted by Daly Planet Editor at 10:21 AM 30 comments: