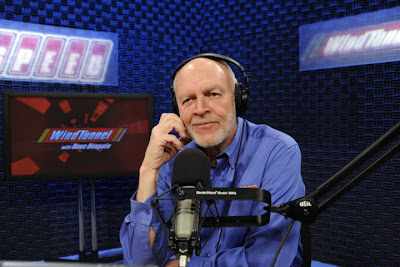 Update: Lots of comments on this column, including several from media members who suggested I was indicating that Wind Tunnel was going to be cancelled. Here is the quote from this very column: "So, goodbye Wind Tunnel. My time as a viewer is done." Pretty sure that statement makes things clear.

The long and winding road of the cable TV network that started life as SpeedVision continues to twist. The latest victim is the Sunday night motorsports television franchise called Wind Tunnel.

The original idea behind the series was to echo the success of the Larry King Live show on CNN. King made a living mixing high-profile guests with the common man through telephone calls from viewers around the world. CNN had King on seven nights a week and for many years he was untouchable.

Dave Despain became the Larry King of Wind Tunnel because of his broad experience in motorsports. Despain paid his dues and grew into a lovable TV curmudgeon by using his dry sense of humor and inability to accept what the motorsports PR types tried to pass along as being the truth.

At one time Wind Tunnel was also on multiple nights a week and attracted a wide variety of motorsports personalities from seemingly all types of racing. That was also a time when the SPEED management was committed to building a TV network around racing. Those days have been long gone for many years.

Despain wound-up with an hour of his franchise on TV Sunday nights and an extra chunk streamed online when the TV show was done. It was an interesting mix, but one that allowed the voice of the fan to be heard clearly as an integral part of the show. Now, that voice has been silenced.

SPEED has quietly ended viewer participation in the TV hour of Wind Tunnel. No more phone calls, no more emails and selected tweets jammed painfully into a moment late in the show. The network that prides itself on being interactive has slammed the door on its own fans. The ability to ask a question of a guest is gone and so is the very spirit of the program.

For many years SPEED's senior management steadfastly refused to produce a NASCAR news and interview program on weekdays. No one would watch, they said. Then, along came Race Hub. There was a time when SPEED panned the concept of trying to create a general motorsports news and highlight program on weekends. Now, we have SpeedCenter. These two programs now have the network spotlight.

Left in the lurch is Despain. The last few weeks have seen him pushed aside in no uncertain terms. The most embarrassing a co-hosting appearance by James Hinchcliffe that put the IndyCar driver literally into the host position and Despain to the guest seat. The pain on Despain's face was easy to see.

The fundamental appeal of live TV done in this setting is the uncertainty of what would result. Over the years, Despain and his callers have drawn-out some amazing responses on hot button topics from a wide variety of motorsports personalities and executives. For many years, news was made on Wind Tunnel.

Now, following the controlled model of Race Hub, there is no sense of the unexpected. There is no emotional topic that has tempers running hot. Appearances are prearranged, focused and planned. Even zingers from contributors like Robin Miller or guests like Paul Tracy cannot breathe life into this format.

Despain never had co-hosts for the hour because most motorsports experts focus on only one area. With the new format of SPEED personalities being involved viewers get Tommy Kendall talking NASCAR diversity and Ralph Sheheen sharing his Formula One expertise. It's not fair to those involved or the viewers to force these contributors into this role.

It's been wonderful to watch Wind Tunnel over the years. Those TV memories, both good and bad, were pure and spontaneous. The current crop of talking heads fits the SPEED mold of politically correct guests who say the right thing and move along. There are SPEED programs to promote, marketing agendas to be met and network personalities who need more exposure.

The bottom line is that without the strong voice of the fans, Wind Tunnel is nothing. The self-serving rehash of events from the weekend with FOX and SPEED personalities commenting makes little sense. Before Wind Tunnel, fans see an hour of SpeedCenter and then an hour of NASCAR Victory Lane.

Instead of making news and pushing hot buttons, Despain is now slaved to repeating racing topics and showing scripted video highlights for the third time in the same evening. It must be a bitter pill to swallow for a man who developed this franchise from the start.

So, goodbye Wind Tunnel. My time as a viewer is done. Memories of this outstanding series can now join the others that SPEED has successfully managed right into the ground. When marketing and promotion push spontaneous and honest commentary aside, the results are almost never good. This version of Wind Tunnel is quickly proving that point.

We invite your opinion on this topic. Comments may be moderated prior to posting.
Posted by Daly Planet Editor at 10:00 PM 72 comments: 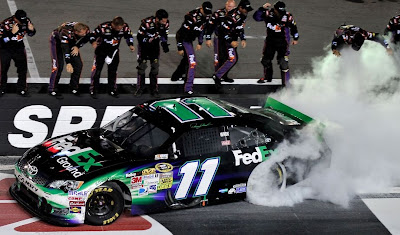 There was lots of action, but ultimately Denny Hamlin won the race. The big winner, however, may have been NASCAR. After a season of lots of talk but little action, there was hard racing from start to finish at the "new" Bristol Motor Speedway.

Nicole Briscoe had some Little League World Series issues, but the NASCAR Countdown show featured Rusty Wallace, Brad Daugherty and Ray Evernham. As in years past, the problem with this race is that once the pre-race is over there is literally no time for this group to get on the air again. 15 second laps and critical pit stops combined with a heavy commercial load make on-camera time almost impossible.

Allen Bestwick was the other bright spot of the night. He called a race with enthusiasm from start to finish and coaxed the best out of Andy Petree and Dale Jarrett. While the pit road group was adequate, Bestwick was the person who really shouldered the load and made it work.

The racing on the track was constant, but ESPN's philosophy of showing two cars at a time continued. It's almost embarrassing to have to replay an incident at a tiny track like Bristol, but that certainly was the case on Saturday night. Zooming-in to make pretty pictures results in missing the moments that make up the race.

For once, the stars of the show were the drivers. Pushed into a new situation at a critical time in the season, they responded with hard racing instead of some of the points racing we had been seeing earlier this year. The results were the elements fans want to see. Intense action and good storylines with some caution flags along the way are the elements that built the sport.

Missing from this telecast were the beautiful wideshots of the track after restarts with the cars running almost all the way around the race track. Instead, the hyper-tight shots of single cars were mixed with in-car cameras and replays of the incidents that were missed. It's a formula.

Sunday night SPEED will return with three hours of motorsports. It should be interesting to see the driver, owner and media comments that SpeedCenter, Victory Lane (replay) and Wind Tunnel will relay to fans. This race is going to cause a buzz that will last for days. That is just what the sport needed.

We welcome your opinion of the ABC/ESPN coverage of the Sprint Cup Series race from Bristol. Comments may be moderated prior to posting. Profanity, hateful speech and derogatory comments are not in the spirit of this blog. Thanks again for stopping by.
Posted by Daly Planet Editor at 9:30 PM 32 comments: