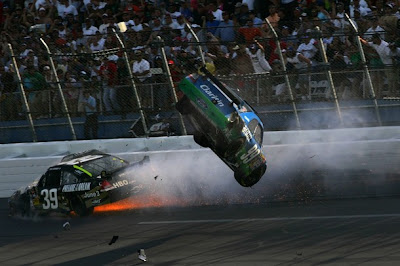 Just like the conversations and opinions concerning the various Sprint Cup Series teams and drivers, the discussion about NASCAR coverage on TV is diverse.

When Talladega rolls around, those discussions normally get a bit more intense, just like the racing. Click here for the TDP column and reader comments about the 2008 Fox coverage of the April Talladega event.

This season Fox and their sister cable network SPEED once again overlapped for thirty minutes from 1 to 1:30PM. SPEED was ending RaceDay while Fox was just taking the air from the Hollywood Hotel. This forced fans to choose between Wendy Venturini and Hermie Sadler talking to the drivers or Chris Myers, Darrell Waltrip and Jeff Hammond previewing the race. How and why this situation continues to happen is anyone's guess.

Fox has moved the booth announcers outdoors during the pre-race programming. This certainly hearkens back to the older style of NASCAR coverage and has presented some interesting backgrounds as well. One reason TV changed this practice was the TV booths themselves were able to be lit for live on-camera shots. This allowed the "upstairs" crew to turn around and get on-camera should a red flag or long caution occur.

By this time of the season it is clear that the Fox gang has some favorite drivers and this week Jeff Hammond took several airplane rides with one of them, Carl Edwards. This feature was just part of the Fox extended pre-race show.

After a morning hour of NASCAR Now on ESPN2 and then two hours of RaceDay on SPEED, perhaps extending the Fox broadcast was not something that was going to really boost the ratings. It would be the racing that would take care of that issue.

Kudos to Fox in the Nationwide Series race review for editing-out the tasteless shot of a crying Katie Kenseth leaving pit road arm-in-arm with Krissie Newman after Matt's violent flip. The fact that ESPN actually replayed that footage on Sunday morning showed that network's learning curve is not over yet.

Again this season, both ESPN and Fox centered their promos and previews around "the big one." It was suggested that the tension would build until "the big one" late in the race would jumble the field and result in angry drivers. Well, the promise was never fulfilled. "The big one" came early.

Great pictures and sound were again wonderful in HD and the camera work was outstanding at a very difficult track to cover. Replays of the early crash were right on the money and told the story of how one error can lead to disaster.

The early accident took the momentum out of the broadcast and Mike Joy worked very hard to get it back. There were stories to be followed and the effort of Joy to tell them was a confirmation of his stature in this business. Joy directed a lot of traffic and kept things in order. His performance may be a lesson for others who will follow in his footsteps later this season.

Waltrip and McReynolds were effective and really made the situations that fans were seeing on the track make sense. Some high-profile teams just chose to run in the back, like Carl Edwards and Kyle Busch. Others, like Dale Earnhardt Jr., chose to push to the front at every opportunity.

One source of debate is the frequent use of the in-car cameras, especially "bumpercams" on the long backstretch at Talladega. The positive side is that the angle helps TV viewers to understand how close the racing really is in the era of the COT and bump-drafting.

The negative side is that the viewer's perspective is frequently interrupted or lost as the big hoods or tails of cars seemingly pop-up and then are gone. Cutting directly from one in-car to another is very tough, especially without the announcers helping identify the cars. It's not their fault, they are busy calling the racing action.

Once again at Talladega, it was tough to have four video boxes on caution flag pitstops. The pit strategies were so varied that one team would just be taking gas while another went for four tires and a full load of fuel. It rarely worked out that the race off pit road made sense by the time the Director cut to the wideshot.

The pit reporters once again made those stops work well for the viewers by adding facts about the team's day into the information being relayed during the stop. Fox handled interviews with the drivers out of the race and this crew showed why they are currently the best in NASCAR.

Digger made his presence known but was not a big interference. The cartoon at the beginning made no sense and the animated female cartoon character used over billboards was almost as annoying as the Fox NFL robot. What a strange distraction for the sponsor who is trying to feature a product.

The TV coverage of the final lap and the aftermath of the accident will be something discussed around water coolers on Monday and perhaps through the week. The TDP live blog of the race contained all kinds of opinions about how Fox ended the day.

What we do know is that Carl Edwards and Brad Keselowski did almost exactly what Regan Smith and Tony Stewart had done earlier at the track. In post-race comments, Smith stated he did not want to turn Stewart and possibly cause him injury. Keselowski had no such issue.

It has been a very long time since a Sprint Cup Series car was in the air with the potential of getting into the spectator fencing and possibly the crowd. Fox followed the cars involved in the accident and then watched the drivers emerge, including Edwards jogging across the finish line.

The camera angles were replayed only after the network knew that all drivers were fine. The in-car shots of Edwards airborne and of Newman getting a face-full of car were spectacular because the TV viewers knew those drivers were not injured.

What was less certain was the status of the fans in the stands. Nothing was offered by the TV team except a shot of multiple ambulances along the frontstretch. It was not until Chris Myers confirmed for viewers well into the post-race that multiple spectators were injured did the reality of the danger sink in.

This is the same TV team that handled the Michael McDowell qualifying accident in Texas with professionalism and expertise. Click here for the TDP article about that day in NASCAR TV history.

On Sunday at Talladega, perhaps the situation was a bit different. The shock of such a violent crash and the prospect of injured fans surprisingly did not cause the broadcast to change course. Interviews went on as scheduled. The advantage, of course, is that the TV production truck and the announcers can use off-line cameras to see exactly what was going on in the stands.

The fact that they chose not to share those images or information with the TV viewers meant one of two things. Either fans were injured and being attended to at that time or there was no problem except for the broken fencing.

Not offering that information is certainly the right of the TV network, but ending the race and leaving the air without a NASCAR or medical official at least giving a general update was perhaps not the best choice.

Here at TDP, our readers got the information on the injured fans from Sirius radio and Twitter posts from the track. Shortly after that time, the information appeared on both the ESPN and Jayski websites.

Certainly, there will be many different opinions of this situation and all of them will have valid points. Ultimately, it will be up to NASCAR to determine what can be done so this discussion will not have to take place again.

ESPN2 will offer a full hour of Talladega conversation on NASCAR Now at 5PM Monday. Allen Bestwick will be joined by Dale Jarrett, Andy Petree and Ray Evernham. Over on SPEED, Steve Byrnes will host Michael Waltrip and Chad Knaus on TWIN as they offer first-hand observations of the racing weekend.

Thanks to Getty Images for the photo, click on it to see it full-size.

TDP welcomes comments from readers. Just click on the comments button below to share your opinions. This is a family-friendly website, please keep that in mind when posting.

Thanks once again for taking the time to drop by The Daly Planet.
Posted by Daly Planet Editor at 1:00 PM 59 comments: