Boris Stands Alone And Jimmy Gets A Muzzle 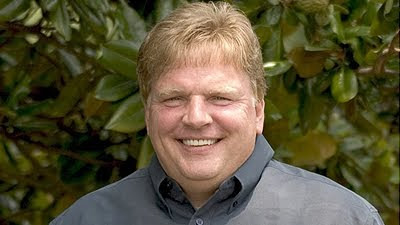 It was supposed to be a solid doubleheader of NASCAR TV on Monday after the exciting win by Tony Stewart in Kansas. Instead, it was an early evening face-off and a watered-down imitation of a fan favorite.

Allen Bestwick was first on the air with the one-hour version of NASCAR Now. This week, Randy LaJoie was absent and replaced by Boris Said. The remainder of the panel consisted of show regulars Ricky Craven and Ray Evernham.

Right from the start, Craven and Bestwick showed why ESPN has been using them regularly in this role. Both were up to date on the information about the weekend and used their personal experiences to frame their comments.

Evernham is especially powerful on this show, offering a crew chief point of view that fits quite well with Craven's sophisticated perspective as a former driver. Evernham's influence was brought to the forefront this week as Goodyear quietly began testing the bigger wheel and tire that he has been advocating for months.

The odd man out was Boris Said. Throughout the show, Said always took the different point of view and made the choice that was the opposite of Craven and Evernham. Although Said worked well on Sunday in the studio with Mike Massaro, this was not a setting in which he fits in. That was quickly apparent.

Allen Bestwick was annoyed and it showed. Several times he called Said out for purposefully disagreeing in the ongoing discussion. Bestwick does not tolerate this kind of behavior. The shift from the good humor of LaJoie to the attention seeking of Said was not good for the show.

The comments of Evernham and Craven about the final pitstop and the tire decisions of the top teams showed why these two have TV value. It was Evernham's perspective on the variety of changes that were available to the crew chiefs and Craven's comments on what the drivers needed that told the tale.

This program continues to offer outstanding highlights and extensive soundbites from drivers and crew chiefs. While there was no guest this week, the program kept a solid pace and covered a lot of ground. LaJoie returns with Craven and Evernham next Monday on a 5PM show hosted by Massaro who is filling-in for Bestwick.

The second show of the doubleheader was This Week in NASCAR on SPEED. TWIN recently added Jimmy Spencer as the third panelist joining Michael Waltrip and Chad Knaus. This resulted in some very interesting moments last week as the outspoken Spencer butted heads with Waltrip on a variety of issues.

This week, there were very different marching orders. Steve Byrnes introduced the panel and what fans got was politically correct and polite chat. There must have been an interesting production meeting as both Spencer and Waltrip were completely muzzled.

Chad Knaus offered his normally candid comments about what went right and wrong for his team as they were beat by Stewart for the win. Once Knaus found his "on-air legs" there has been no stopping his emergence as a top TV personality working both sides of the fence. Knaus also works with Larry McReynolds and Bootie Barker on NASCAR Performance, one of the best programs on SPEED.

Instead of Spencer and Waltrip battling over viewpoints and opinions, they were finishing each other's sentences and smiling politely. It was awful. Knaus was the panelist who spoke the most and continued to offer his style of analytical information.

Unfortunately, many viewers tune-in for the antics of Waltrip and the differences of opinion among the panel. That is why this show has been struggling with just two panelists all year long. Adding Spencer was a welcome change, but if these new marching orders are going to be in effect for the remainder of the season, this show is in trouble.

Did you watch both shows? Tell us your opinion on Monday's NASCAR Now and TWIN. To add your comment, just click on the comments button below. This is a family-friendly website, please keep that in mind when posting. Thanks for stopping by.
Posted by Daly Planet Editor at 5:00 PM 30 comments: