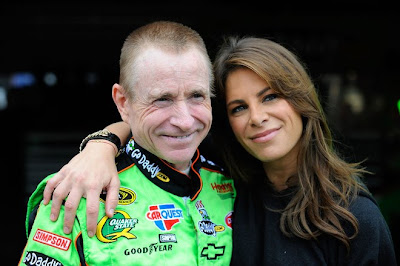 Mark Martin just does not cut it as a Go Daddy Girl, so Jillian Michaels came to the Auto Club Speedway and drummed-up a bit of publicity by working out some of the TV and media personalities in the sport.

ESPN's Allen Bestwick and David Newton were alongside FOX's Krista Voda and SPEED's Rutledge Wood. Three of the four made it through unscathed. Pictures of Wood on the floor in the fetal position beside a trash can were making the rounds shortly after the workout session was over.

Now it's Sunday, Michaels is nowhere to be found and the only thing at the speedway is rain. Luckily, it's a fine mist and the weather is supposed to be clearing. The journalists were grumpy because the free pace car rides were cancelled. It's a tough life.

The conflict between FOX and fans continues. Ratings were down last week and into the awful range. Media members pointed to ticket sales, expensive hotels and the price of gas as the problems. Thousands of fans on TDP pointed directly at FOX.

This season, the conflict between director Artie Kempner and the fan base has hit critical mass. Kempner has completely disconnected from NASCAR fans. When FOX is done, Kempner is off to other assignments and does not return until Daytona in February. Unlike the SPEED and ESPN folks, Kempner can simply walk away from the train wreck he has helped to create.

Many people said that last week's FOX coverage from Bristol was perhaps the worst NASCAR race ever produced by that network. From the start, the issue was the pictures. There is no RaceBuddy for the Sprint Cup Series races. There are no free in-car camera feeds. FOX is the only game in town.

We labeled Kempner's insane approach to NASCAR racing on TV as "hyper-tight" coverage. Single car shots, extended in-car cameras and essentially no perspective on the actual race itself are the hallmarks of his NASCAR efforts. The topper is showing only the winner of the race crossing the finish line.

Kempner has decided that the race is over when the leader finishes. Unfortunately, fans of the other top teams and drivers have made the commitment to watch FOX for four hours. Not seeing their driver race to the finish has caused them to simply walk away from the TV coverage.

Saturday, ESPN telecast the Nationwide Series race from ACS. The coverage was solid and featured one key element. The director kept all the cars racing for position in the camera shot being sent to viewers. In-car cameras were, for the most part, used to embellish the coverage and not provide primary video.

The Auto Club Speedway features passing on pit road and restarts. There is very little passing in the race once the field gets strung out. The stories of the race are fuel, tires and pit strategy. FOX has the best pit road reporters on TV and in Bristol they were rendered useless. This week, they must play a key role or the real stories will never be told.

Darrell Waltrip will have plenty of time to talk with long green flag runs and it should be interesting to see how much he interacts with fans live on Twitter. Waltrip has recently become aware that the fans have strong opinions on the live telecasts and seemingly wants to make things better.

Larry McReynolds and Jeff Hammond have become non-factors this season. Waltrip is the leader and FOX has decided to make him the focal point of the coverage. It should be very interesting to see what topics he decides to discuss and how his opinions on Dale Earnhardt Jr. and Kyle Busch are presented.

FOX has all the tools to make this race a treat. A veteran play-by-play announcer in Mike Joy, good analysts and solid pit reporting. Ultimately, with radio offering an alternative to the FOX commentary it may come down to the simple choice of what pictures are being sent to fans.

We will update the rain situation in the comments section and pass along any race delays. As always, we invite your comments on the TV coverage today from ACS. To add your opinion, just click on the comments button below. This is a family-friendly website, please keep that in mind when posting. Thanks for taking the time to stop by The Daly Planet.