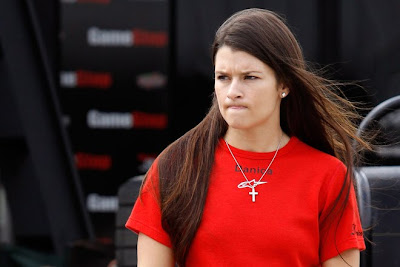 The weather is holding up and the track is fast. Early camera views show the track is amazingly empty of fans. Hopefully, they are out enjoying some food and the scenery around the track and will head for the grandstands shortly.

Nicole Briscoe has been wrestling with Rusty Wallace and Brad Daugherty all season long. Wallace is sometimes brilliant and sometimes embarrassingly off the mark. Daugherty is a NASCAR cheerleader who stays on message and adds very little in terms of opinions about the week to week happenings in the sport. Briscoe has done a very good job keeping both of them in check and focused.

Danica Patrick has faded from view, but she has lots of open wheel experience on this track. It should be interesting to follow just how much TV time ESPN gives her in the pre-race show. The network is banking on Patrick to save the series in 2012 when she runs full time.

Marty Reid is finishing out a bittersweet season for him. Removed from the Sprint Cup Series coverage on ESPN only days before it started, Reid is doing his final NASCAR telecast for the year and perhaps for a lot longer than that. Bestwick has been solid in his role and since ESPN only does Nationwide series telecasts up to July, Reid's future plans may be changing shortly.

Reid will call the race with Dale Jarrett and Andy Petree. ESPN once again this season did not bring in two other analysts for the Nationwide Series races once the Cup coverage began. This leaves Jarrett and Petree to do the vast majority of the prep work for the Cup events, but then still have to handle the live Nationwide Series telecasts.

Imagine if ESPN has brought in Ricky Craven and Randy LaJoie for these races. Something to make the series different from just being a AAA Baseball version of the Cup telecasts. With only three seasons remaining for ESPN, it's doubtful things will change.

Jamie Little had some interesting moments last race with driver interviews. She is back on pit road today along with Dr. Jerry Punch, Vince Welch and Dave Burns. There are sometimes hot tempers in the final race, especially after incidents on the track. Keep an eye on how ESPN uses the pit reporters today.

Homestead was wonderful on TV Friday night as SPEED produced the Camping World Truck Series race. TV viewers saw clumps of trucks, wideshots of the track and kept a perspective of just who was where. That is the challenge today for the ESPN team.

This post will serve to host your comments on the TV coverage of the Nationwide Series race from Homestead-Miami Speedway. To add your opinion, just click the comments button below. Thanks as always for adding your voices to our conversation this season about the NASCAR TV partners. 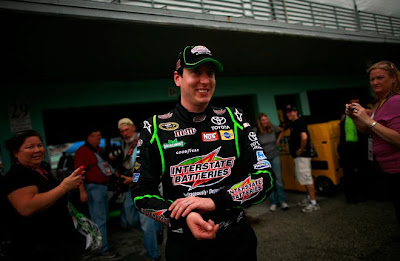 The rain changed a lot of things on Friday and the result was a quick rescheduling of Sprint Cup Series practice. SPEED has added two sessions at 9:30 and 11:30AM ET in addition to the Nationwide and Cup qualifying coverage already scheduled. This means a big day for SPEED leading up to the Nationwide Series race at 4PM on ESPN2.

On this final race weekend, SPEED has a habit of dusting off Darrell Waltrip and returning him to the track. Saturday, he will work both Sprint Cup Series practice sessions with Larry McReynolds and Mike Joy.

There are a lot of stories unfolding and several that may develop into headline news as the series heads into the final race. Crew chief rumors, secret fines and the potential loss of the entire Red Bull organization may slightly overshadow the Chase on Saturday.

Tony Stewart and Carl Edwards have been fun to watch and professional in their approach to almost all of the media this week. It should be an interesting transition for them to go from the familiar faces of the SPEED reporters on Saturday to the over-hyped world of ESPN on Sunday.

Saturday should be all about serious on-track business for most teams as the weather has not allowed them track time to this point. There is a lot on the line not only for this year, but for 2012 when it comes to this final race.

Rick Allen gives the FOX crew a break when he calls Nationwide Series qualifying with Jeff Hammond and Phil Parsons at 1PM. Joy, Waltrip and McReynolds return for Cup qualifying at 2:30PM. It will be interesting to see if Mother Nature allows all this to happen.

This post will serve to host your comments about the Saturday day shift coverage on SPEED. To add your TV-related question, just click on the comments button below. Thanks for taking the time to stop by The Daly Planet. 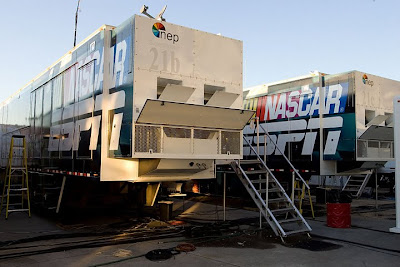 Sunday is a big day for the Worldwide Leader. Tony Stewart and Carl Edwards have delivered the kind of fan-friendly Chase for the Championship that the sport has needed.

Both drivers will be at a Thursday afternoon press conference for a final Chase update. SPEED will break into a re-air of last Saturday's Nationwide Series race at 1PM ET and carry the press conference live. No word if ESPNEWS will also have coverage.

What ESPN does these days is big things. Lots of big things. The network announced this week that a total of 72 cameras will be deployed at Homestead on Sunday. The usual compliment of equipment will be supplemented with some special bells and whistles.

An "iso cam" is a camera that is used full time for only one purpose. When producing an NFL game, the producer has a couple of designated "iso cams." As the offensive team breaks the huddle, the producer will say "Iso-1 number 88, Iso-2 number 44." He is telling the "iso-cam" camera operators the jersey numbers of the players he wants "isolated" on that play.

That is how TV gets those cool replays of just one player at a time. After you see the wide receiver make a great catch live, you suddenly find yourself seeing a replay of just him running his route from start to finish. You may wonder just how TV did that. Well, he had an "iso cam" on him for that play.

Sunday in Homestead ESPN will have two high camera platforms above the speedway. One "iso cam" will stay with Stewart and another will stay with Edwards from start to finish. That will give ESPN the opportunity to show the race while also keeping a full time eye on the championship contenders.

Meanwhile, back in the garage there is also something going on. Both Edwards and Stewart are going to get additional "iso cams" in their garage stalls. Operated robotically (like the in-car cameras) viewers will be able to get an overhead shot of the teams at work during live practice coverage as well as any crisis repairs that happen as a result of an incident or equipment failure during the championship race.

I don't know if they flipped a coin to decide, but ESPN reporters Shannon Spake and Marty Smith drew the assignment of shadowing the two points leaders from the time they hit the ground on Thursday up through the green flag. Not surprisingly, Shannon will be with Edwards while Smith will spend the weekend with Stewart.

Edwards turned down the opportunity to be an in-race reporter, although his car will have an in-car camera unit with many different angles. It will be Stewart speaking with Dale Jarrett before and during the race in that capacity. Stewart will also be carrying an in-car camera set-up.

This year Allen Bestwick will be in the TV booth for ESPN. That means he cannot be down on the finish line stage to conduct the championship interview and be the TV host for the Sprint Cup trophy presentation. Instead, it will be Dr. Jerry Punch handling those duties. His college football sideline reporting skills may come in handy for this assignment.

Finally, for the first time there is some real innovation in the TV coverage of the sport that is about to pay-off. The RaceBuddy application over at NASCAR.com that is free to any Internet or smart phone user will be on during the race. Six in-car cameras with team radio audio will be combined with a backstretch and pit road cam.

ESPN will also once again be using the ESPN Nonstop commercial format for the second half of the race. This is the first step toward integrating commercial content without interrupting the action. The race continues to be seen on a video box while the commercial airs in another on the same screen.

There have been a lot of changes since ESPN last came to Homestead. This is a perfect opportunity to end the season on a high note with a solid race telecast. The equipment, manpower and storyline is in place. As usual in sports TV, it's just a matter of putting the pieces together in a way that keeps the fans watching.

We welcome your comment on this topic. To add your opinion, just click on the comments button below. Thanks as usual for taking the time to stop by.