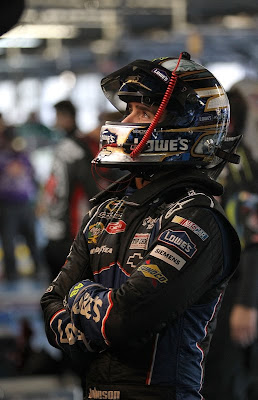 Coverage switches from ESPN over to ABC for this night race. That means no RaceBuddy or Watch ESPN app as ABC is a broadcast network and has exclusive rights. There will be ESPN Nonstop commercials in the second half of the telecast.

Some ABC local stations might be showing local news during the pre-race show, but all will join for the race which has total national coverage live. Please let us know if any station does not join for the green flag.

Mike Massaro is handling the hosting duties for the Infield Pit Studio. Rusty Wallace and Brad Daugherty are the analysts. Tim Brewer is in the Tech Garage.

Rusty and Brad are once again going to be asked to talk about the Chase, but not neglect the race. It's a tough mix that ESPN has struggled with for years. The script this week may be Jimmie Johnson, but keep an eye on the topics featured in the pre-race. They often become the script for the race coverage.

Allen Bestwick, Dale Jarrett and Andy Petree have been on the air for three days now on ESPN working hard. We will see how much gas they have left in the tank for a couple of hours of night racing on the ABC side. The good side is they handled the practice and qualifying coverage, the downside is they have to be exhausted.

Jamie Little and Vince Welch are out in Las Vegas for the final IndyCar race of the season. Shannon Spake and Mike Massaro are working pit road for the race with Dr. Jerry Punch and Dave Burns. Pit road could be a lonely place if this becomes another gas mileage race or a hectic mess if incidents happen on the track.

ESPN has a great Nationwide Series race and a rough Cup telecast last week. Somehow, the Cup races seem to keep the tradition of "hper-tight" coverage rolling along. CMS has a ton of action on the tight two-groove track and it's easy for TV to miss a lot of it with the focus on only one or two cars at a time. Keep an eye out for how ESPN produces the actual racing.

The quad-splits for caution flag pitstops are still outstanding. The ESPN Nonstop makes a big difference. Having Allen Bestwick has made a huge difference and closed the information gap. Punch has been outstanding on pit road. Those are the good things.

The bad is that ESPN still tries to work back to the stories from the pre-race show. Rather than let the racing just happen, it's been about the topics selected in advance and then forced into the telecasts. That has alienated fans and TV viewers.

So, here we go. This post will serve to host your opinion about the ABC coverage of the Sprint Cup Series race from the Charlotte Motor Speedway. To add your comment, just click on the comments button below. Thanks! 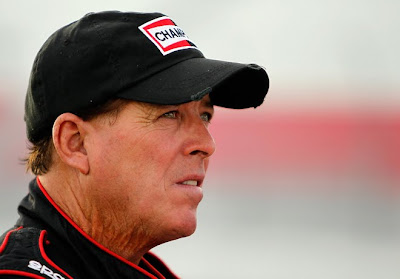 Here we go with an afternoon delight from Las Vegas. The trucks are splitting the weekend with the Indy Cars. Ron Hornaday is the story.

Same SPEED story of coverage tactics is in place. Ray Dunlap is covering pit road with Krista Voda once she finished the pre-race show. Rick Allen will be in the TV booth with Phil Parsons.

The trucks are going to be interesting because none of the Cup drivers are in the field. Pay attention to some of the names at the back of the starting grid.

This post will serve to host your comments on the Camping World Truck in Las Vegas. To add your opinion on the coverage, just click the comments button below. Thanks for stopping by.