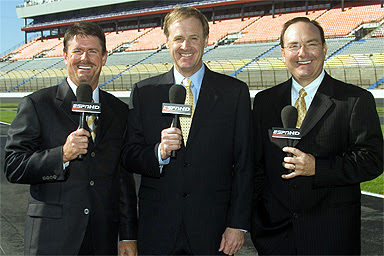 It has been a long season already for many of ESPN and ABC's racing programs. Regular viewers got to watch diverse offerings like "Fast Cars and Superstars, Ray Evernham: Race Wizard, and Car Wars with Funkmaster Flex."

All this programming, including the "ESPN Garage" block, was part of the ESPN/ABC group returning to NASCAR. This year, they are telecasting all the Busch Series races, and in two weeks they will begin airing the NEXTEL Cup events through the end of the season. The network last aired NASCAR events more than five years ago.

Saturday, ESPN aired the Busch Series race in Chicago using the crew that will broadcast the NEXTEL Cup Series events. It was a "dress rehearsal" for the big time, which begins on July 29th in Indianapolis with The Brickyard 400. The same production team will produce the NASCAR events on both ESPN and ABC.

ESPN has designated their announce team in the broadcast booth as Dr. Jerry Punch, Rusty Wallace, and Andy Petree. Punch is a longtime veteran and NASCAR "Insider," Wallace honed his broadcast skills on the IndyCar Series last season, and Andy Petree has proven to be a "natural" on TV in his "Larry McReynolds" role for the network. While Rusty tends to get fired-up, the calm demeanor of both Punch and Petree has worked well in balancing out the tone of the events from the booth.

As part of the return to NASCAR, ESPN has created a very nice Infield Studio, which moves from track-to-track, much like the venerable Hollywood Hotel for Fox Sports. Hosting the pre-race show, and inserts during the race is Suzy Kolber, an ESPN veteran reporter and anchor. Alongside her is Brad Daugherty, the former basketball star who integrated himself into NASCAR with ownership stakes in several teams, and a participation on NASCAR's Diversity Council.

In Chicago, Kolber proved to be smooth and a good study. With help from the booth analysts and all the pit reporters, she was allowed to direct traffic and get out of the way. Her professional appearance also goes a long way to setting the bar for the remainder of the broadcast team, and lends an air of "TV credibility" to the infield at last. Daugherty has been slowly branching out on other ESPN networks as a "NASCAR analyst" in providing previews and updates, but he continues to struggle in defining his role, and what purpose he serves in the telecast.

After nineteen Busch Series races, it was finally time for ESPN to take the Chicago race and "act" as if it was a NEXTEL Cup event. To their credit, they pulled it off by emphasising some fundamental NASCAR TV production techniques that are often ignored. The biggest change was ESPN listening to the fans complain that unless "their driver" was running in the top five, they never saw or heard of him.

To counteract this hot-button issue, ESPN turned to a very good source of information right under their fingertips. They shifted the burden and the challenge of keeping track of all the cars in the field right back to the infield. They turned to Allen Bestwick, Mike Massaro, Dave Burns, and Jamie Little. ESPN "empowered" their pit reporters to become active members of the telecast throughout the race...and it worked.

In a sports broadcast, the "topic" emphasized by the network throughout the event is called the focus. Sometimes, in a football game, the focus may be on one team's defense. In basketball, it may simply be the big center that has to be double-teamed every time he gets the ball. NASCAR fans were upset with both Fox Sports and TNT this season because their focus raised some issues.

Fox was tremendous at broadcasting their events, with a veteran crew and great technical skills. But, their focus was often on only five or six cars in the entire race. Usually, Earnhardt Jr. and the Hendrick gang were among them. By the time the end of the race came, many fans of the drivers who were not running in the top five or in the "featured group" had no idea what had happened to their guy.

With TNT, fans complain that they never re-cap the field and are often just obsessed with the top five cars, regardless of who they are or how they got there. The actual stories of the race just seem to be left to the TV review shows or news articles. This was never made more clear than after the Michigan race, where TNT interviewed two drivers and then went to a vampire movie fifteen minutes early. There on pit road sat Kyle Busch, Michael Waltrip, and several other drivers who clearly were the interviews the fans wanted to see. Because the race was over, it just did not matter.

ESPN appears to have taken a very deep breath and made a commitment to curing the issues that plagued NASCAR's first two NEXTEL Cup broadcast partners this year. In Chicago, during the dress rehearsal, ESPN introduced their own version of NASCAR "wide open." They used the pit reporters as additional "anchors" to report-in regularly on the drivers to which they were assigned.

Both the play-by-play announcer, Jerry Punch, and the Infield Studio host, Suzy Kolber, called on any pit road reporter at any time to update and re-cap the races of the drivers in the mid and rear of the pack. Give Jerry Punch credit for being disciplined enough to let the reporters talk, and then step-in to resume the coverage from the booth.

This approach is the result of one big factor that has shaken the NASCAR TV partners to their core this season. It is called Hot Pass, and is offered by DirecTV. This feature delivers to viewers an entire "network" created around only one car. Two veteran announcers, real time stats, multiple in-car camera views, and as many as three video sources available on any TV screen make this temptation hard to pass-up for many fans. It is fair to say this is the most talked about issue on the TV side of the fence this season.

As the "main broadcast" goes on, there are actually five other "mini-broadcasts" going on as well. Often times, those broadcasts yield more information and updated scoop than the big boys on the network. As Bill Weber told fans at Sonoma that Juan Montoya was "not going to make it on fuel," the DirecTV team was clear that it was going to be close, but he should be fine. Needless to say, after winning the race Montoya drove another lap to Victory Lane. TNT was so perplexed they left the air without even showing the final results of the race.

In two weeks when ESPN steps-in, they will find themselves competing with DirecTV's Hot Pass, the NASCAR national radio broadcast, the In-Demand pay-per-view TV package, NASCAR's own Track Pass Race View, and the Pit Command service on NASCAR.com. The single goal of ESPN is to keep fans watching the network's video signal and listening to the network's audio. In the past, this was a given. Now, it is more of a challenge than ever before.

The ESPN Chicago Busch Series race went a long way toward showing fans that ESPN can be ready for big time coverage of NASCAR at the track. The content was good, the on-air talent was professional, and the race production was strong. It is going to be up to the network to review their notes, and make the final tweaks needed to get and keep the attention of a NASCAR fan base already distracted by other media forms offering coverage of exactly the same event.

The Daly Planet welcomes comments from readers. Simply click on the COMMENTS button below or email editor@thedalyplanet.tv if you wish not to be published. Thanks again for taking the time to stop by.
Posted by Daly Planet Editor at 11:30 PM 8 comments: