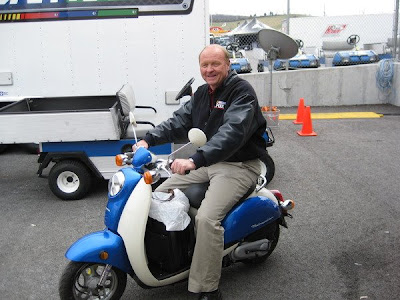 There is an unexpected twist that has been thrown into the mix for the live Sprint Cup race today. The Texas wind has kicked-up and gusts of 40 mph have been blowing everything around at the speedway.

This should affect the race in several ways. First, the COT's at speed are bothered by cross-winds. Secondly, the big bump on the track where the tunnel is located should now upset the cars even more with the wind blowing. Finally, the trash from the fans will be blowing onto the track and the COT is notorious for overheating when the grill is blocked.

Fox is going to have to adapt from the scripted opening to deal with these issues. All the other stories concerning Kyle Busch, Carl Edwards and the potential closure of the 8 team have already been discussed on NASCAR Now and Raceday.

Speaking of NASCAR Now on ESPN2, who from NASCAR is going to make the phone call to get things straightened out for the rest of the season? This Sunday morning, once again NASCAR Now refused to promote the start time and TV network of the very race they were on the air to promote. Instead, the network again promoted the NHRA races...simply because they were on ESPN2.

Chris Myers and Jeff Hammond start the day at 1:30PM from the Hollywood Hotel. Darrell Waltrip will appear on the show and then move upstairs for the 2:16PM green flag to call the race. Mike Joy and Larry McReynolds will once again be alongside Waltrip.

Down on pit road will be the best group of reporters in the business. Dick Berggren, Steve Byrnes, Matt Yocum and Krista Voda will hopefully be used a lot more often to recap the field and follow the stories of the day.

This race features a tough pit road entrance, a dogleg on the frontstretch and a big bump over the tunnel. The challenge for the production team is to track the progress of the teams as pit strategy and gas mileage scenarios play out. Accidents at this track take a while to clean-up, so expect to see the Hollywood Hotel during extended cautions.

This post will serve to host your comments about the TV coverage of the Sprint Cup Series race from Texas on Fox. To add your opinion, just click on the comments button below. This is a family-friendly website, please keep that in mind when posting.

Thank you for taking the time to stop by The Daly Planet.
Posted by Daly Planet Editor at 12:30 PM 388 comments: