The Alternate Version Of TWIN 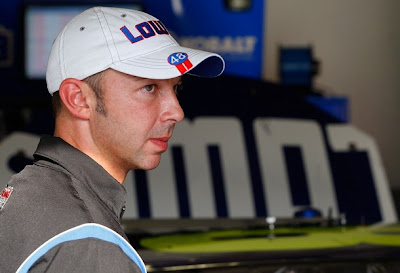 Let's face it. Chad Knaus can offer more NASCAR information in five minutes than Michael Waltrip can offer in an hour. That's what crew chiefs do. There's no self-promotion and no goofing around. Just lots of data.

Knaus is now a TV veteran who stands-up for himself on the air and that changes This Week in NASCAR on SPEED every time he appears. It changes it for the better.

This week, Michael Waltrip opened the show with a rant about his Twitter account and how fans could message him as the show aired at 8PM. Seeing as the program was taped at 4PM, this was going to be interesting. Unfortunately, at 8:20PM Waltrip was Tweeting that he was still not home yet and probably needed time management classes. So much for that experiment.

Knaus was delivering information at lightning speed and it was apparent that he was still fired-up about the Bristol weekend. He offered analysis of the action on the track and then detailed his own team's ill-fated pitstop that took the #48 out of contention for the win.

"I think a track like Bristol is what separates the good spotters from the bad spotters," said Knaus. He followed-up with an explanation of how different the Bristol Motor Speedway is from any other track on the circuit and how the pressure on the spotters is extreme.

This yin-and-yang of Waltrip and Knaus makes this show work. The same thing cannot be said for Greg Biffle on this program. The two drivers simply do not click, while crew chief Knaus can look at Waltrip and understand his role on this TV series. Knaus gets it.

At 8:30PM, halfway through the show, there were no new Tweets from Waltrip. The Sprint Cup Series highlights had been done and the discussion of Kyle Busch had included Waltrip's opinion that the hot tempered Busch had turned over a new leaf and was going in a new direction.

"Not a lot of people know this, but he hugged me," said Waltrip while Byrnes and Knaus collapsed in laughter.

Unfortunately, TWIN chose not to include video highlights from the Whelen Modified race on Wednesday. The Camping World Trucks were included, along with a small soundbite from Ron Hornaday after he failed to win his 6th race in a row.

There were some problems in the Nationwide Series race involving a rookie driver, but TWIN moved quickly past the accident caused by this young man who took out the leader of the race. That leader just happened to be named Kyle Busch. This issue was buried by the media faster than Bill Weber's departure from TNT.

Knaus offered a great preview of the night race in Atlanta by referencing the fact that rain delays had forced teams to race there at night before. Waltrip made sure to promote ticket sales on the heels of Kenny Wallace offering on Twitter that Atlanta would be losing a race next season to make way for Kentucky on the schedule.

"Garage Pass" was a new feature unveiled this week on the program. On the subject of racing at Bristol, Knaus appreciated the new track surface and suggested it would grow on fans. Waltrip reminded viewers that Mark Martin's one thousandth start was a great example of exactly the type of racer Martin has been for many years. Tough, fair and once again he almost won.

This type of fast-paced conversation is something Allen Bestwick has done quite well on the Monday version of NASCAR Now for ESPN. TWIN's new feature finally got the panel out of the highlight grind and let them address topics in a rapid-fire manner. "See, that's breaking it down," said Byrnes when Knaus and Waltrip were done. Byrnes was right, this new feature worked.

Waltrip eventually sent some short Twitter messages around 8:50PM including one to country music star Blake Shelton that urged him to think with his dipstick. The personality differences between Waltrip and Knaus continue to make this combination work on TV. The Felix and Oscar of NASCAR make TV fun and that is exactly what a highlight show like this needs and what ESPN has never grasped.

TDP welcomes your comments on this topic. To add your opinion, just click on the comments button below. This is a family-friendly website, please keep that in mind when posting. Thanks for taking the time to stop by The Daly Planet.
Posted by Daly Planet Editor at 8:06 PM 56 comments: