Your Turn: Sprint Cup Series From Atlanta on ESPN 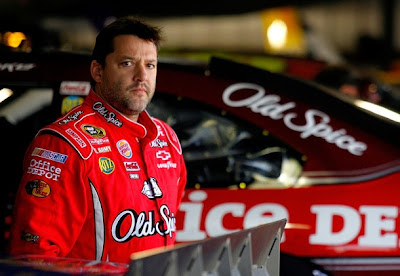 Marty Reid is getting his first taste of the NASCAR TV telecasts that have to handle multiple storylines. The race, The Chase and the bubble boys dominated this telecast of the Sprint Cup Series race from Atlanta.

Allen Bestwick started things off with Rusty Wallace and Brad Daugherty from the Infield Pit Studio. College football caused this show to come on a couple of minutes later than scheduled. Tim Brewer was in the Tech Garage.

Once again, the pre-race show featured pre-recorded packages that had been used earlier on the week on NASCAR Now and other ESPN TV outlets, including ABC. Erin Andrews may have some promotional value on other channels, but in a pre-race show for a very important race re-airing her laps with Dale Jarrett was an interesting choice.

Marty Reid is handling his first season of Sprint Cup Series races for ESPN. This has proven to be a challenge. Reid is used to calling the action, but juggling the various themes that ESPN throws his way has been rough. In this race, Kyle Busch was the early theme and then Greg Biffle took the attention.

Points as they run right now is a term that some fans hate. ESPN thumped TV viewers over the head with the Chase and the points until the real racing began with about 40 laps remaining. Suddenly, it was never mentioned again.

Dale Jarrett and Andy Petree have been working together for several seasons. They have been through many difficult times with the NASCAR on ESPN team. This is their best season ever matched with Reid in the booth and Bestwick hosting from the infield.

Jamie Little, Dave Burns, Dr. Jerry Punch and Mike Massaro were the pit reporters. They tried several times to interview crew chiefs during the race, but mostly ran into the stone cold wall of silence when it came to decision making and updates.

There were no technical problems, no weather issue and the sound was outstanding from the race. Coverage was the normal ESPN style of moving from one small group of cars to another. Commercial timing was tough with several cautions and key passes for position happening while the network was away.his post is you opportunity to offer your own TV wrap-up of the ESPN coverage of the Sprint Cup Series race from Atlanta. To add your opinion, just click on the comments button below. This is a family-friendly website, please keep that in mind when posting. Thanks as always for taking the time to stop by.
Posted by Daly Planet Editor at 12:30 AM 45 comments: