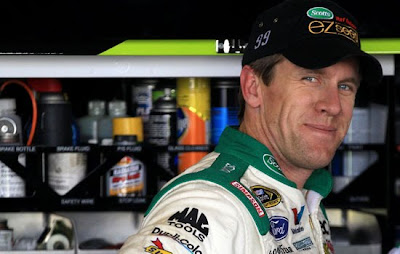 The TV coverage from Pocono begins on Friday at noon ET with SPEED watching the Sprint Cup Series teams practice. An earlier 10AM practice for the Camping World Trucks will air on a delay at 2PM ET.

Rick Allen will be leading the SPEED TV team up in the booth while John Roberts anchors ground-level. Kyle Petty and Larry McReynolds will be handling the Cup coverage while Phil Parsons and Micheal Waltrip cover the trucks.

There is a lot going on in the sport right now. Carl Edwards re-signed with Roush on Thursday so reporters will be watching to see what domino is next to fall in the driver silly season. Brad Keselowski is nursing two banged-up feet after a testing crash at Road Atlanta. Expect updates on whether he can go in the race or not.

Nashville Superspeedway bowed out this week of hosting any NASCAR races in 2012, so that leaves a couple of Nationwide Series dates up in the air. Fan suggestions have ranged from Rockingham to Lucas Oil Raceway in Indy, so it will be interesting to see if NASCAR addresses that situation.

Speaking of the Nationwide Series, ESPN is just televising the race from Iowa on Saturday, no practice or qualifying. Marty Reid will call the action but joining him in the booth is a very interesting combination. Ricky Craven and Kenny Schrader will be the analysts. ESPN may very well be using this telecast to audition Schrader for more spins in the TV booth.

In the meantime, Craven has come of age and is just waiting for more opportunities to move into higher-profile NASCAR programming on ESPN. It would be wonderful since ESPN split Marty Reid off onto the Nationwide Series if the network provided him Craven and Schrader as analysts down the stretch.

Over the past four seasons, one of ESPN's biggest issues has been using Dale Jarrett and Andy Petree endlessly as analysts on practice, qualifying and races in both the NNS and Cup Series. Its time to let the NNS series have it's own personalities in the TV booth.

As we go through Friday from Pocono, this post will serve to host your TV-related comments. To add your opinion, just click on the comments button below. Thanks for stopping by, hope the weather stays nice and Friday at Pocono is good TV.