Your Turn: Nationwide Series From Montreal On ESPN2 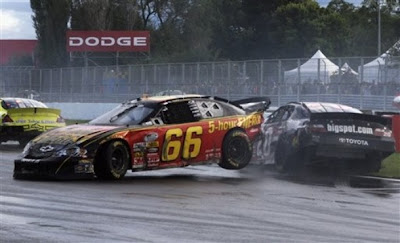 We are going to continue our popular feature where fans offer comments on the TV coverage of NASCAR races immediately after the event.

Sunday afternoon brought the Nationwide Series on ESPN2 from Montreal. Dave Burns hosted the pre-race show with Shannon Spake and Jamie Little as the other two pit reporters. They set the field and reviewed the previous race, which was run partially in the rain.

Marty Reid was teamed with Rusty Wallace and Andy Petree for the call of the race. The event was interrupted by several awkward caution periods and a continual shuffle of positions and strategy.

The field was diverse with many international drivers mixing with some familiar road course ringers and a handful of Nationwide Series regulars. Both Carl Edwards and Kyle Busch were also in the race.

Before we offer our comments, please take a moment to pass along what you thought of the ESPN2 telecast. To add your opinion, just click on the comments button below. This is a family-friendly website, please keep that in mind when posting. Thanks for taking a moment to help us discuss the NASCAR TV scene.
Posted by Daly Planet Editor at 5:15 PM 68 comments:

Nudity Pushes NASCAR To The Back Burner 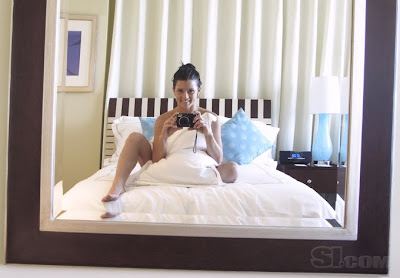 Well, it seemed to be a pretty good idea at the time. Former sports car veteran and current SPEED on-air talent Tommy Kendall would be hosting Wind Tunnel for the first time as Dave Despain continues his summer vacation.

Since Kendall is new to this role, getting him a top-notch guest to interview would be a very big plus. Well, some good things come in small packages, so SPEED lined-up the one and only Danica Patrick for the show.

Patrick is on the verge of re-signing with an IRL team in turmoil led by Michael Andretti. She is also rumored to be exploring her options to race part-time in a NASCAR series in 2010. Emails from fans have her in a Randy Moss truck, a JR Motorsports Nationwide Series car or even Tony Stewart's non-existent third team with Go Daddy as a sponsor.

Sunday night would have given Kendall a chance to talk about those topics and perhaps get Patrick to deny or confirm her plans for next season in several areas. Now, he has something else to talk about.

Click here for the Sports Biz story from Darren Rovell over at CNBC. We are using this link because it is one of the few that does not contain nudity. That's right, just when the stories about Patrick began to be themed around her driving, an old issue came to the surface again.

This time, the amazing story is that ESPN the Magazine is supposedly going to feature Patrick nude in its upcoming "Body Issue." This is a poorly disguised attempt by ESPN to cash in on the Sports Illustrated swimsuit franchise that makes millions for that publication.

The ESPN angle is that they will have both male and female athletes in different stages of well...you know. The "hook" is that ESPN will not reveal which athletes are in the issues until well...you buy it.

Print publications are a mess these days. Click here for the real goal of ESPN. That's right, if rumors are true there will be nude images of Patrick available on the magazine's Internet site in October. Sure, they will be tasteful. Sure, they will be professionally done. All of that makes little difference.

Patrick has the opportunity to advance her career into NASCAR in a tough economic time and with the IRL continuing to struggle. She has the exposure of the right kind in the media that has been focusing on her consistent finishes and curiosity about the world of stock car racing. Now, just toss that aside.

Just like Kyle Busch took a while to understand there is a reason you stand and talk to the TV reporters after a race, Patrick is going to have to grasp that in order to make it as a credible female in NASCAR, the clothes have to stay on.

The reason there is an invocation, a National Anthem and a fly-over at NASCAR events is because this All-American sport is aimed directly at the family. The driver's wives and children stand with them during the pre-race and hug them in Victory Lane.

Kendall is going to have to ask about this issue on Wind Tunnel or risk letting a caller do it. In our current society, the words "nude female" will top the words "NASCAR racing" in a Google search every time. If Patrick does not dip her toe in NASCAR, this issue is moot. She and the IRL can continue their very strange relationship.

Kendall's Wind Tunnel program on Sunday could get very interesting if he widens his discussion with Patrick to topics like her Go Daddy commercials and modeling projects. Especially if he lets viewers chime-in. Click here for the Wind Tunnel website where SPEED lets viewers interact with the show. The program airs live at 9PM ET on Sunday.

TDP welcomes your comments on this topic. To add your opinion, just click on the comments button below. This is a family-friendly website, please keep that in mind when posting. Thanks for taking the time to stop by.
Posted by Daly Planet Editor at 5:00 PM 69 comments: 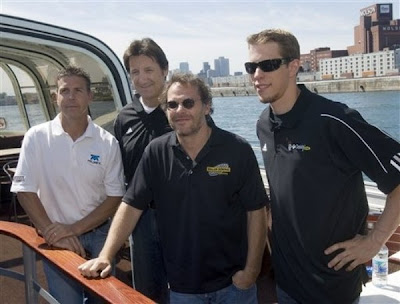 There should be an opportunity for a very interesting pre-race show from the Circuit Gilles Villeneuve in Montreal today.

The field for this event normally contains some Canadian drivers, but this year the list is even more international. Familiar names like Max Papis, Patrick Carpentier and Jaques Villeneuve are in the field. Also racing Sunday are Jean Francois Dumoulin, Alex Tagliani and Antonio Perez.

On the American side, Jeffrey Earnhardt is back as is Brad's brother Brian Keselowski. Familiar road course ringers include Boris Said, Ron Fellows and Andy Lally. It should be a challenge for ESPN to get the fans up to speed on the line-up.

Marty Reid will call the play-by-play with Rusty Wallace and Andy Petree alongside. No real indication of why Randy LaJoie is not on the telecast and that is a shame. LaJoie is closely identified with this series and works very well with Wallace and Reid. LaJoie provides the fun with his comments and that will no doubt be missed on this telecast.

Dave Burns is on pit road with Jamie Little and Shannon Spake. Burns will probably be hosting the pre-race show as he has in the past for these stand-alone races. In many ways, having the host roaming pit road is more effective than three men in suits sitting in an infield studio.

This road course has seen its share of TV adventures. From the rain tire debacle to the Robby Gordon vs. Marcos Ambrose slam-fest, the track seems to make for tight tempers whatever the weather.

The challenge for ESPN's crew is to keep the leaders updated while searching for the best racing on the track. Unlike an oval where the director can keep one designated camera on the leaders at all times, a road course requires keeping track of multiple cars while continuing to cut cameras constantly.

The use of in-car cameras has been a huge issue since ESPN took over the Sprint Cup Series. It's almost as if the network has discovered this technology for the first time. In a recent race, the director actually cut to an in-car camera angle in the middle of a high speed crash on a superspeedway. Viewers saw nothing but smoke and blurred images.

In Montreal, the TV team will have a new challenge. The director must first show the cars and establish their position in the race and on the track before cutting in-car or the TV viewers will have no point of reference. This is not Watkins Glen, where familiar turns are easy to identify even from the in-car angle.

The weather is a 30% chance of showers with a high of 70 degrees. Looks like this may be a solid road course race for TV after all. The diversity of the field may lead to some outstanding racing and that is exactly what the Nationwide Series needs right now.

This post will serve to host your comments before, during and after the Montreal race on ESPN2. To add your opinion, just click on the comments button below. This is a family-friendly website, please keep that in mind when posting. Thank you for taking the time to stop by.
Posted by Daly Planet Editor at 12:00 PM 498 comments: