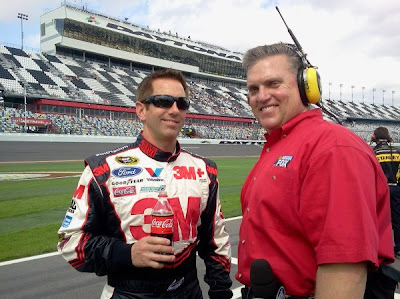 Thursday is a big day for SPEED as the network gets to cover two Sprint Cup Series races, even though they are not for points. The highlight of the day are the Gatorade Duels. There is, however, lots of other TV surrounding those two sprint races.

ESPN2 slips into action with 10AM coverage of the Nationwide Series practice. That will put Allen Bestwick, Dale Jarrett and Andy Petree back on the air. Jarrett will later be joined by Ray Evernham and Nicole Briscoe for a post-duel edition of NASCAR Now on ESPN2 at 5:30PM.

The spotlight shines squarely on SPEED as the network kicks things off at noon ET with a one-hour telecast of the Camping World Truck series practice. This will be a first look at the cast of characters fans will see on SPEED this season. In the TV booth it's going to be Rick Allen and Phil Parsons. Ray Dunlap and Hermie Sadler will handle the reporting duties.

Next up at 1PM is a one-hour edition of RaceDay that serves as the preview show for the duels. John Roberts hosts with with the full RaceDay crew of Kenny Wallace, Larry McReynolds and Kyle Petty on the SPEED stage. Wendy Venturini, Matt Clark and Rutledge Wood are the reporters.

Krista Voda looks awfully good in the Hollywood Hotel and she will once again host the pre-race show for the duels with Jeff Hammond from that location. Mike Joy, Darrell Waltrip and Larry McReynolds will call the race from the TV booth. Steve Byrnes and Dick Berggren are the pit road reporters.

SPEED will air the duels live at 2PM and then replay them both starting at 8PM ET. There is no other scheduled re-air, so set the DVR.

Post-race both TV partners will go head-to-head. SPEED will offer Victory Lane while ESPN2 offers NASCAR Now both at 5:30PM. Victory Lane is a signature show for SPEED after every race while NASCAR Now has been struggling with bad timeslots and no re-airs for two years now. Roberts, Petty and Hammond will handle Victory Lane with Wendy Venturini and Bob Dillner as the reporters.

The telecast day wraps-up with another Camping World Truck Series practice with Allen, Parsons and Waltrip and 6:30PM. Then, the re-air of the duels follows at 8PM.

Please use this post to offer your TV-related comments as a big day of NASCAR TV rolls by. To add your opinion, just click on the comments button below.

We will also be providing a comment stream on Twitter at twitter.com/thedalyplanet that is always entertaining. We expect many of the TV personalities, reporters and NASCAR officials to take part in that. Have a great Thursday of racing!