Nationwide Series From Charlotte on ABC 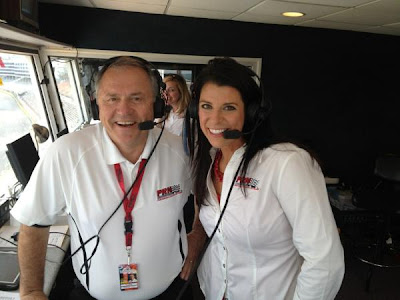 It might be ABC for the television, but a nice story from Saturday afternoon's Nationwide Series race is Wendy Venturini co-anchoring the PRN radio coverage with Doug Rice.

Meanwhile, Dale Jarrett has the weekend off. So, Allen Bestwick will be joined by Rusty Wallace and Andy Petree in the TV booth. There is 100% local TV station clearance today, so the race will not be delayed.

ESPN has an agenda that is drive by celebrity and popularity. NNS driver Johanna Long had none of her qualifying laps show and was not interviewed while driver Danica Patrick had extensive coverage and her qualifying effort shown from start to finish before a live interview. It's just today's nature of sports TV.

As usual, it will be the Cup cross-over drivers vs. the Nationwide regulars. ESPN has been rough on the series with fundamentally bad coverage featuring Cup drivers and Danica Patrick. The network believes the connection with Cup drivers will keep viewers interested. It's been awful for the full time NNS teams.

Sponsorship within this series has been directly affected by the fundamental refusal of ESPN to update the full field or even the cars on the lead lap. The disconnect between the teams in this series and ESPN is huge. Often, ESPN is only on the air for the race and SPEED covers practice and qualifying.

It should be interesting to see how Wallace handles being back in the TV booth on such a big weekend, especially after a week where he was chosen for the NASCAR Hall of Fame in what even he admits was a shocker. Wallace's Nationwide Series team is closed down and his son has not found a full time ride.

The weather is hot, but it will be very interesting to see if the action in the race mirrors that of the Cup Series with long green flag runs and the emphasis on pit stops and fuel mileage. There was a "Global Rallycross" race done as an exhibition and a small jump on the frontstretch caused gouges in the track. Keep an eye on that issue as the NNS cars are going to be the crash test dummies for this potential problem.

Twitter is the place for live Nationwide Series race chat. My account is twitter.com/thedalyplanet and I urge you to sign up and check it out for free. We will live blog the Indy 500 Sunday on Twitter as well.

As always, happy to have your TV comments before, during and after the NNS race today right here. Thanks for taking the time to stop by The Daly Planet.