Taking A Moment For Steve Jobs 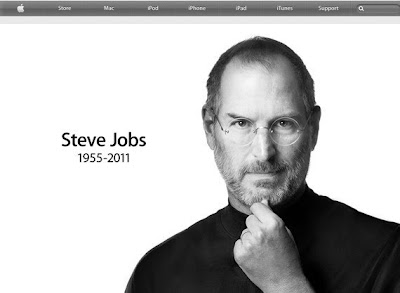 "Remembering that you are going to die is the best way I know to avoid the trap of thinking you have something to lose."

That was Steve Jobs in 2005 delivering a heartfelt commencement address at Stanford University. Jobs lost his battle with cancer on Wednesday, surrounded by family members.

Every day I interact with people who send me text, pictures and videos from their iPhones. My favorite songs are neatly arranged on playlists in my iPod. My Christmas gift to my 80 year-old mom last year was an iPad.

Let's take a moment for Steve Jobs. Here are some comments on his passing and legacy.

In his public life, Steve was known as a visionary; in his private life, he cherished his family. We are thankful to the many people who have shared their wishes and prayers during the last year of Steve's illness; a website will be provided for those who wish to offer tributes and memories.

We are grateful for the support and kindness of those who share our feelings for Steve. We know many of you will mourn with us, and we ask that you respect our privacy during our time of grief.

This from President Obama:

Michelle and I are saddened to learn of the passing of Steve Jobs. Steve was among the greatest of American innovators - brave enough to think differently, bold enough to believe he could change the world, and talented enough to do it.

By building one of the planet's most successful companies from his garage, he exemplified the spirit of American ingenuity. By making computers personal and putting the Internet in our pockets, he made the information revolution not only accessible, but intuitive and fun. And by turning his talents to storytelling, he has brought joy to millions of children and grownups alike. Steve was fond of saying that he lived every day like it was his last. Because he did, he transformed our lives, redefined entire industries, and achieved one of the rarest feats in human history: he changed the way each of us sees the world.

The world has lost a visionary. And there may be no greater tribute to Steve's success than the fact that much of the world learned of his passing on a device he invented.

In our little NASCAR world, it seems ironic that just yesterday on Twitter we had an extended discussions about the pro's and cons of the new iPhone. It is a device that is all over the garage, grandstands and TV compound at every race.

While the word "visionary" was used repeatedly in many news stories, Jobs really influenced our entire culture with some of the innovations that made their way into our lives. It was a fascinating life.

Happy to have your comments on Jobs passing and what thoughts it brings up in connection with the changes in your life, technology-based or not. Just click the comments button below to add your thoughts. Thanks for taking the time to stop by.