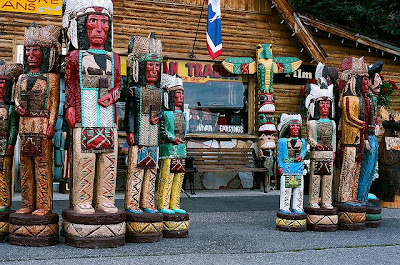 The big boys could come over from the Cup side and race in as many events as they wished. There was no problem with them winning, but the days of scoring driver points and snatching the Nationwide Series championship using superior financial resources were gone.

Now, only the Nationwide Series "regulars" could run for the prize and publicity. This season, there would be a race within a race. While the Cup drivers might be leading, there would be a snarling pack of "regulars" battling for the driver points and the championship.

Just like in the Chase for the Cup, there would be two stories to cover from the drop of the green flag in every Nationwide Series race this season. That would bring added exposure for the "regulars" as well as new story lines for the media covering the sport.

Theory met reality in Daytona a week ago when ESPN put the TV focus squarely on the Sprint Cup veterans and Danica Patrick. It's an old song that ESPN knows how to hum all too well. When the race was over, ESPN interviewed some Cup drivers and Danica before rudely departing. What was on next? A Daytona 500 preview show, of course.

In Phoenix the TV pre-race show was shortened by live college basketball. The emphasis was once again on the Sprint Cup Series drivers in the race and Danica. A Trevor Bayne Daytona 500 review was the big feature. Even as Bayne stood in front of his sponsorless Nationwide Series car, the questions were about the Daytona 500.

Since 2007, ESPN has been slowly driving a stake into the heart of the Nationwide Series. Click here for a classic TDP article describing the ESPN/ABC pre-race show for the 2007 Busch Series race at Talladega. There was one little problem. The announcers never mentioned the Busch race.

ESPN is basically livid that it is playing second fiddle to FOX and TNT during this part of the Sprint Cup Series season. On weekends, that anger is exposed by the constant use of Sprint Cup Series drivers and Sprint Cup story lines on the Nationwide Series telecasts.

On weekdays, the network takes out its frustrations by refusing to include the Sprint Cup Series races on its NASCAR Now motorsports TV calendar for the week until ESPN starts producing them. This has been the case since the new TV contract began in 2007.

ESPN takes the first seven months of the racing season to express its righteous indignation and then dumps the Nationwide coverage like a hot potato when the Cup series comes calling. Suddenly sandwiched between Saturday college football games on a stick-and-ball TV network, the Nationwide Series limps to the finish with a resounding thud.

Over the last four years ESPN has offered Nationwide Series fans live races without a play-by-play announcer, races called by pit reporters debuting in the TV booth and on-air line-ups featuring a "wide variety" of personalities. The Nationwide Series is the TV testing grounds for ESPN.

In Phoenix, the new points saga continued to unfold with neither of the top two finishers in the Saturday race competing for the driver championship. Luckily, there was plenty of time on the TV clock and ESPN would be able to work through the top finishers in the post-race show.

The network worked through the Sprint Cup Series drivers and Danica. Then, Reed Sorenson was interviewed. The tone was as if the interview was forced on ESPN because Sorenson was now the points leader. Then, things got even stranger.

With the "regulars" still standing on pit road, ESPN went back into the studio and began to wrap-up the coverage with about six minutes still left in the TV time. It quickly became apparent that a choice had been made when Allen Bestwick signed-off.

Instead of offering the "regulars" TV time for sponsors and fans, ESPN had decided to go five minutes early to the college basketball studios for highlights. In a flash Stenhouse, Allgaier, Scott and Wallace had become wooden Indians standing along pit road. Everyone knew they were there, but no one acknowledged their presence.

Thirty seconds of national TV time in a post-race show is a bonanza for "regulars." Thirty seconds of TV after a good finish with a sponsor mention is a dream. Instead, the NASCAR TV partner that carries every single race decided to pass those drivers by and run.

The unsponsored cars, the short field and the start and parkers who towed all the way to Arizona tell the tale of Nationwide Series reality. Without a viable TV partner actively interested in supporting the teams and sponsors, the outlook for the "regulars" is bleak.

ESPN has four more seasons of exclusive Nationwide Series coverage in the current NASCAR TV contract. It makes one wonder what the network's motives really are when events like this unfold. It certainly should make NASCAR wonder. 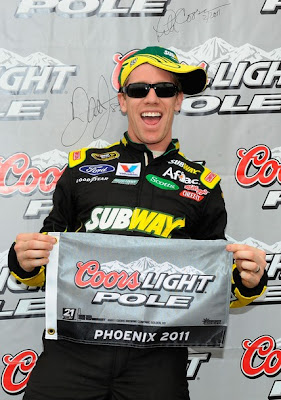 The real season starts this week as the ten month grind begins at the Phoenix International Raceway. FOX starts with a thirty minute pre-race show, then opening ceremonies and race coverage.

Chris Myers, Darrell Waltrip and Jeff Hammond are first up. It should be interesting to see if FOX keeps the new smaller outdoor set used in Daytona. That put the trio out among the fans and gave the pre-race show a very different vibe.

Waltrip joins Mike Joy and Larry McReynolds in the TV booth for the race. Waltrip took away Joy's final lap call last week by talking over top of the TV veteran. We will see if Waltrip learned anything from the criticism he received or if he continues to be the primary voice in the booth.

Steve Byrnes, Matt Yocum, Krista Voda and Dick Berggren are the pit reporters. Unlike Daytona, this group should be busy today with tires, fuel and pit strategy being the big stories. We still have to see how long the tires last on a green track scrubbed by rain overnight.

While Daytona and the lovebug style of racing demanded wideshots and special coverage, PIR will tell the tale of whether the TV director is going to continue this style or return to the classic FOX approach of single car shots and in-car cameras.

The weather looks good and the scenery from PIR is outstanding. With some good racing, PIR has the potential to erase a lot of the bad memories of the lovebug push show seen at Daytona.

This post will serve to host your comments on the FOX coverage of the Sprint Cup Series from PIR. To add your TV-related comments, just click on the comments button below. This is a family-friendly website, please keep that in mind when posting. Thank you for taking the time to stop by The Daly Planet.