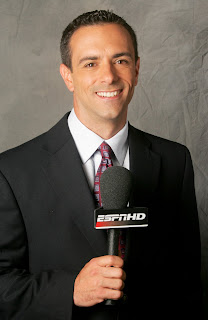 The issues surrounding car giant General Motors were swirling on Thursday. CNN, MSNBC and the Fox News Channel were continually using words like bailout, bankruptcy and collapse. It was exactly what NASCAR fans did not want to hear.

Dealing with this type of issue for NASCAR's television partners could not be more tricky. Avoid it totally and a network can be accused of toeing the NASCAR party line. Present it simply as a news item and many fans will continue to be confused about what all this means for the sport.

ESPN veteran Mike Massaro was at the helm of Thursday's NASCAR Now. The production team for this show chose to jump into the deep end of the pool and face the GM questions head-on.

Massaro introduced Ed Peper, the North American VP for Chevrolet. He appeared shortly after Massaro had referenced the Thursday story in the New York Times talking about the crisis at GM as a whole. Peper was the perfect guest to set the tone and talk about the NASCAR implications of this mounting problem.

Peper answered "nothing" when asked what this latest news story meant for the Chevy interest in NASCAR. He rejected the notion of bankruptcy outright for GM and reinforced that the plan submitted to the Federal Government should allow GM to recover and eventually payback any loans given to them by the taxpayers.

As fans have heard many times, Peper reinforced that nothing sells more cars and trucks for Chevrolet than the company's association with NASCAR. While some track and associate sponsorships have been ended, Peper was strong in his assertion that Chevy is in with NASCAR for the long haul.

To gain a financial and business perspective, CNBC correspondent Darren Rovell appeared on NASCAR Now for the first time this season. Rovell has been a favorite of this show for the past two years where sports business issues are concerned.

Rovell did not disagree with Pepers, but made it clear that what the Chevy executive "wants" to do might not fall in line with what the Federal Government might "make" him do where NASCAR is concerned.

"It doesn't matter if you think your marketing works," said Rovell. "You can't do that anymore." Those are ominous words.

His suggestion was that money given to GM was going to come with the mandate to eliminate NASCAR participation. "Sports marketing has changed in the last week alone," Rovell said. "Even if you can prove that (it's) win on Sunday, sell on Monday, it doesn't matter. It doesn't look good around this time and what the country is dealing with."

What Rovell is advancing is the growing notion that the US auto makers who get Federal money may be forced to curtail any sports spending completely. This issue has already arisen with companies who sponsored everything from football stadiums to golf tournaments being forced to withdraw the funding in order to get Federal help.

"There are going to have to be concessions made," said Ricky Craven. He was the next guest on NASCAR Now and spoke to the salary issues in the sport. "Drivers will have to make concessions," he said. "We don't talk a lot about that...but they will have to make less money." Craven agreed with Rovell that the auto maker issues now on the table are going to have a direct impact on the sport.

This is the type of NASCAR TV that works for everyone. Peper stated the case from the auto maker perspective, Rovell added a sports business view and Craven closed the topic by continuing his run on ESPN of speaking plainly and honestly on a wide variety of NASCAR topics.

This season NASCAR Now has been the leader in addressing the economic issues in the sport. The TV series now seems to be far removed from the "gotcha" journalism of last season, including the Ron Hornaday public relations disaster. Massaro is in his first year as a fulltime co-host of this program and Thursday proved once again that ESPN VP of Motorsports Rich Feinberg made the right choice in adding him to the team.

Hopefully, the news being reported this season will change for the better, but at least now fans know where they can go to find it.

If you would like to add your comment about NASCAR Now this season or this specific show, please click the comments button below. This is a family friendly website, so comments may be moderated prior to posting. Thanks for your patience.
Posted by Daly Planet Editor at 4:00 AM 14 comments: