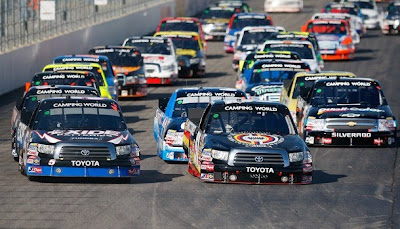 Let's face it. The Camping World Truck Series jump in TV ratings last week was not just due to a single race in Loudon. The trucks were the second part of a slam-dunk doubleheader on SPEED that was started by the Whelen Modifieds.

Click here for the article over at TruckSeries.com that talks about the nice ratings jump for the trucks. The brief article does not mention the Mods or the fact that Mike Joy and Dick Berggren again did a super job of calling the action in a simple and effective TV telecast. Talk about a great lead-in.

Sure, the trucks put on a good show and the hype from the previous race about the Matt Crafton vs. Ron Hornaday dust-up was in the news. Krista Voda does not usually get involved in petty stories, but she did everything but set up a boxing ring for Crafton to take on all comers during the pre-race show.

SPEED is taking a very deep breath this week as only 31 trucks were originally entered for the 9PM ET Saturday race at the Las Vegas Motor Speedway. Since that time, four more trucks have miraculously turned up and the entry list is now set at 35.

The race in Loudon came down to Kyle Busch being pursued by Kevin Harvick who could not get past his teammate Ron Hornaday. Harvick popped a cork after the event while the old veteran Hornaday watched Busch take the bow with the checkered flag.

With neither Busch or Havick in the Las Vegas race, SPEED is going to be faced with the reality of the truck series. There are perhaps fifteen trucks in the field that have run the entire season. Several are add-ons with familiar names like Max Papis, Brian Ickler and Aric Almirola.

On the flip side, many are clearly field fillers. Fans who watch on TV are not going to see the ten or more trucks that pull off the track and drive right into the garage before the first fuel stop. The actual race itself will look very different from the nice formation fans will see at the start.

While SPEED had all the ingredients in place at Loudon with a great lead-in race and a good field with some Cup drivers, Las Vegas is going to be a very different animal. The competition at the front of the field had better be good, because with a big track like Vegas the field is going to string out quickly.

Voda's Setup this week will no doubt be upbeat with the strong TV ratings and the good racing at Loudon. The pre-race producer has also done a good job of keeping fans up to date this season on the changing cast of characters in the series. Some like Todd Bodine have even come and gone and come back again.

It will be up to Rick Allen to mix the excitement of the trucks at speed with the reality of what is happening in front of the fans. Phil Parsons will also be along to keep a perspective on the handful of trucks truly capable of contending for the win.

On a good note, Johnny Benson will join Allen and Parsons for his final appearance of the season in the SPEED TV booth. Benson is still on injured reserve and considering his options for 2010. Michael Waltrip will be attending to Sprint Cup Series duties in Dover, DE.

There is a live sports car race leading into the CWTS this week. The start time is late for the East Coast and the green flag drops after 9:30PM. It should be interesting to see how many trucks are running at the finish and if the series can once again keep the attention focused on the battles at the front of the pack.

We welcome your comments on this topic. Just click on the comments button below to add your opinion. This is a family-friendly website, please keep that in mind when posting. Thank you for taking the time to stop by The Daly Planet.
Posted by Daly Planet Editor at 9:00 PM 12 comments: