There is a new tone being set by ESPN2 and its daily show, NASCAR Now. As opposed to older ESPN shows like SpeedWeek and RPM2Nite, this new Bristol, CT based group has decided to treat NASCAR as a source of controversy and problems. Despite the fact that the sport is over fifty years old, NASCAR Now acts as though it is "discovering" issues that are always dramatically portrayed as "critical." The problem is, NASCAR Now has labored to build any type of credibility with the fans. That struggle continues.

Today, host Doug Banks blew through the Michael Waltrip accident story without displaying any human feelings or even seeming to care about this man and his struggles. Waltrip could have been a bum on the corner who was hit by a car. This is exactly the problem. Those of us who follow the sport know the history of Michael, his connection with Dale Earnhardt Sr., and his giant leap of faith into the world of team ownership with Toyota. We know his wife, his daughter, and his world. Almost everyone has been entertained by Michael on his SPEED Channel show Inside NEXTEL Cup Racing. Whether he makes you laugh or makes you nuts, we know who Michael is and care about him as a person...because we are NASCAR fans. ESPN has consistently struggled to attach "human emotion" to this sport.

Somehow, Clint Bowyer was roped into calling into NASCAR Now for an interview about another thing ESPN is obsessed with...accidents. Bowyer again had to talk Doug Banks through the Daytona accident that took place in February. Just like people who see a NASCAR race for the first time, NASCAR Now has not yet arrived at an understanding that incidents are just a part of the sport. The Bristol, CT producers love the "violence," which we know from both the Bowyer and Reutimann accidents. These are not hockey or baseball fights, and the continued use of accident footage just because ESPN has it is amateurish.

Angelique Chengelis is always on her game, and finally someone talked plainly about the Ford issues with Dale Jarrett and Mark Martin. If Chengelis had been allowed to do the interview of Clint Bowyer, fans would have been able to get good strong questions and information, instead of Bank's scripted fluff. Perhaps, if NASCAR Now made it available, the fans could send in questions for the drivers. Anything that can help with the hideous content of these interviews.

Brad Daugherty is still an interesting person to have on a NASCAR show. Everyone on NASCAR Now has a defined role...except him. He is not called an analyst, not called an Insider, and not called a reporter. He has never been allowed to prepare a feature report, never been allowed to interview NASCAR personalities, and is brought on the show to comment on things without fans understanding his perspective or credibility. I understand he was a Busch Series owner, a diversity executive, and serves on the appeals panel. But, how does that translate to this show? Why is he talking about the "bump" at Texas or Carl Edwards being "the man?"

With Major League Baseball's key match-up of Dice-K against Ichiro following this show, the emphasis of the entire ESPN day was on what ESPN does best, stick-and-ball sports. While NASCAR has held its own during spring training, the opening of the baseball season clearly puts this sport on the back-burner at ESPN in Connecticut.

Last week's host Ryan Burr absolutely got rave reviews for his knowledge of NASCAR, his ability to interview guests, and his relationship with the NASCAR Now reporters. Fans are wondering why ESPN cannot simply put this talented man on this show right now? With baseball underway, there is even more of a need to establish some credibility for this series before it fades even further into the shadows. NASCAR Now needs Ryan Burr, and they need him now.
Posted by Daly Planet Editor at 6:15 PM 11 comments: 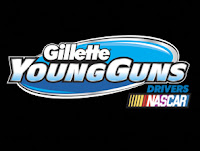 First it was the GEICO Cavemen, and now its NASCAR's "Gillette Young Guns." ABC announced today that the six "Young Guns" will be the centerpiece of a new seven episode ABC prime-time show. The drivers will "train" celebrities on "what it takes to win on the racetrack." The series will climax with a "time trial race," and will debut in June.

"Fast Cars & Superstars" will be hosted by ESPN's Kenny Mayne and NASCAR Now's Brad Daugherty. Among the celebs will be William Shatner, singer Jewel and her boyfriend Ty Murray, Serena Williams from the tennis world, and former NFL coach Bill Cowher.

The series will be produced by Radical Media, which produced "The Life" for ESPN and "Iconoclasts" for The Sundance Channel. It was created by Gillette, which has paid ABC for the air time. Gillette will not say what the ABC time cost, or what it is paying the drivers and celebrities.

USA Today says this is akin to "Dancing With The Stars" but with race cars. Steve Fund, the Marketing Director for Gillette, says "We're seeing a blurring between advertisement and entertainment." You don't say.
Posted by Daly Planet Editor at 1:51 PM No comments:

Cup Scene Daily has a terrific article on the expert who analyzed the Earnhardt Sr. crash lending his assistance in the tragic death of Eric Medlen. His findings are absolutely amazing. Please stop by Cup Scene Daily and read the article.

Thanks to Greg for permission to post this link. http://www.cupscene.com/0411071.htm
Posted by Daly Planet Editor at 1:16 PM No comments:

ESPN has announced that Dale Jarrett will join Marty Reid and Andy Petree to call the Busch Series event at Texas. This moves Dr. Jerry Punch and Rusty Wallace aside for the moment, which ESPN says is a planned break and nothing more.

The ESPN press release stated that DJ would join ESPN for ten telecasts in 2007, but made no mention of any additional role in the future. Dr. Jerry Punch was said to be "on vacation" by ESPN, but in the current release from the network Marty Reid was referred to as the "lead announcer."

Thank you for the email on this subject from both NASCAR and NHRA fans. We will post additional news on this situation as it becomes available.
Posted by Daly Planet Editor at 12:14 PM 1 comment:

The Daly Planet encourages readers to leave comments on any post and forward email directly to editor@thedalyplanet.tv for suggestions on articles or additional comments on the NASCAR TV partners. Thank you for all of the feedback.

Sean in Comments: Totally agree with you 100%. Please (help ESPN) make NASCAR fans happy, NASCAR Now is the only show us fans get to see daily on the sport. Great article, and I look forward to reading more.

GinaV in Comments: Your articles are great. This is a sport with lots of things to watch and talk about, but ESPN needs someone who knows what to talk about.

CRU on Comments: Its most important to encourage you to continue examining TV reporting, and ESPN in particular. Please keep up your good work, it is needed!

Mike via Email: Thank you very much for your comments regarding (ESPN's) NASCAR Now. They are the total truth and I emailed ESPN with almost those exact words.
Posted by Daly Planet Editor at 7:48 AM No comments: