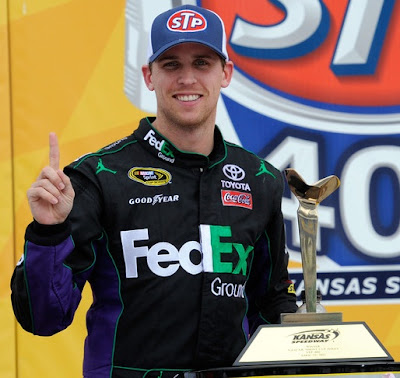 The weather was the story in Kansas as cold temps and a green track from rain Saturday night made things pretty interesting. Teams were fooled on gas mileage and set-ups early on, while favorite son Clint Bowyer suffered engines woes and ultimately retired.

NASCAR on FOX began with a pre-race show that featured a focus on the promotion of the speedway, the sport and the series. It was a tough sell. The truck series race on Saturday showed fans exactly the issue facing the Sprint Cup Series today. Passing was going to be at a premium and "aero" was a word that was going to dominate.

Michael and Darrell Waltrip are exactly what FOX ordered. They invite controversy with their statements and together on the pre-race show are a walking conflict of interest. It gets TV viewers riled up and that is what the FOX executives enjoy doing.

The downside of all this pre-race gushing about the sport is that the kind of content presented by Jeff Hammond is missing. Darrell and Michael are from different eras, but both speak primarily from a driver's perspective. What has been lost is the crew chief perspective. Michael cannot provide this even when speaking as a current Sprint Cup Series owner.

Hammond once again tried to present a variety of interesting reports from different locations, but since there were few caution periods it was awkward at best. This new role has proven to be tough to integrate into a telecast. Surprisingly, Hammond is rarely seen in the garage following up after a key competitor has engines woes.

Mike Joy had an opportunity to flash the magic he used to show regularly on the older FOX telecasts. His calls of the restarts were stellar, but eventually the familiar routine of Waltrip dominating in the booth returned. TV commentary is now conversational instead of exciting, it's just the nature of the beast.

The pictures told the story. Tight shots were so frequent that when one aerial shot was used on a restart it was almost shocking. FOX has a style, they are going to stick with it and once again they did. Pit reporters were stellar, but again not used down the stretch. That is Waltrip time.

FOX continues to use the wideshot at the finish and ended the coverage with some of the lead lap cars finishing the race. There were no technical problems and once again the pictures and sound were solid. In many ways, this was just a repeat of a familiar formula that is being used for the TV coverage of this series.

We invite your comments on the NASCAR on FOX coverage of the Sprint Cup Series race from the Kansas Speedway. To add your opinion, just click on the comments button. Thank you again for stopping by.
Posted by Daly Planet Editor at 12:14 AM 65 comments: