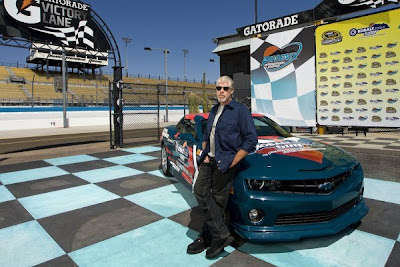 DirecTV released a new statement in relation to the most recent strong-arm tactics being employed by FOX in the ongoing rate dispute involving FOX cable and regional sports networks. SPEED is included as a key piece of the puzzle in this issue.

DIRECTV has always been able to fight on our customers’ behalf and settle its business behind the scenes – where it belongs. But unfortunately that’s not the case with News Corp and FOX.

FOX has had very public and nasty rate disputes with Cablevision, DISH, and Time Warner Cable - and that’s only in the past year. No TV provider is immune to their bullying tactics.

By comparison, DIRECTV has quietly closed deals with hundreds of different programmers in the last few years, representing thousands of channels, and we are prepared to do the same with FOX. We wish you weren’t put in the middle. But we’re listening and talking to Fox daily.

We’re hopeful that FOX will soon become more reasonable with their demands and we can put all this behind us.

Sons of Anarchy creator Kurt Sutter, who is not a FOX employee, took to the airwaves before his most recent series episode on FX. In his recorded message, he took DirecTV to task for possibly forcing subscribers to miss the final five episodes of his hit show. He also posted a profane message on his personal blog accusing DirecTV of using their own subscribers as leverage in the dispute.

It's a tad ironic that Sons of Anarchy actor Ron Perlman, shown above in PIR's Victory Lane, is doing the introductions for ESPN on all of the NASCAR Chase for the Championship races this season.

"All of these shenanigans are interesting to read about, but DirecTV is putting its focus towards getting a deal done that will keep our customers' monthly TV bill at an acceptable level," said DirecTV spokesman Robert Mercer to the FierceCable.com website. "We've been in discussions every day with News Corp and Fox and are perfectly fine paying a reasonable amount for the channels, but asking our customers to absorb a 40 percent increase in tough economic times is just not fair."

So, there you have the most recent update. DirecTV clearly stating once again that the individual FOX regional and cable networks being "bundled" together and offered at one price are not worth a significant increase that will ultimately be passed along to DirecTV subscribers. The 40% number was again used publicly.

Meanwhile, FOX denies that it ever asked for anything approaching that kind of increase and says it offered to continue to let DirecTV broadcast all the various networks while a deal is being hammered out. The FOX contention is that DirecTV drew the line in the sand of November 1 for a blackout of the networks in question.

This weekend is a good example of the impact losing SPEED would have on NASCAR and the fans. SPEED is handling the Friday and Saturday programming from the track in Martinsville with over 12 hours of live coverage on those two days alone.

Expect more finger pointing and posturing on Thursday as these two parties battle over a huge contract renegotiation. What we do know is that SPEED will be on the 20 million DirecTV homes this weekend. What we don't know is just how long the network will be in the dark if DirecTV removes it from service next Tuesday as planned.