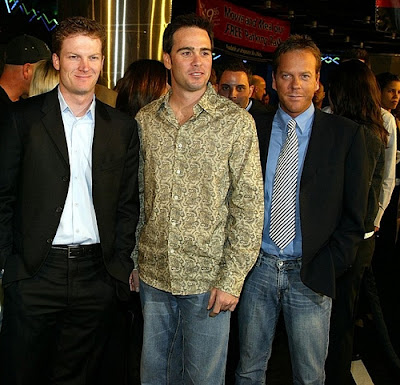 Jimmie Johnson gets to hang-out with some pretty cool people. On the Tuesday following the Homestead Championship Weekend, Jimmie Johnson made an appearance in Bristol, CT at the headquarters of ESPN. Johnson was there as the two-time champ to appear on the network's daily motorsports program, NASCAR Now.

This was a tremendous opportunity to "pay-off" the season for this TV series, which has struggled with both the fans and the ratings. Now, they had the champ on the set, and he was going to stay for the entire thirty minute show.

Over the last ten months, ESPN has used Stacy Compton and Boris Said as the analysts for this series. Compton has worked especially hard, and put himself through a brutal season of driving fulltime in the Craftsman Truck Series while still appearing regularly on this program in Connecticut.

For NASCAR technical experience, the show has brought in Tim Brewer all season. Added to Brewer's experienced perspective were the commentaries on the sport from both Brad Daugherty and Tim Cowlishaw. While Brewer represented the "nuts and bolts" of NASCAR, Daugherty and Cowlishaw offered opinions and predictions.

The bright spot for the show has been the hard work of the reporters. Shannon Spake has provided yeoman's work this season, and is clearly the MVP of this series. Also, throughout "The Chase," ESPN's highest-profile NASCAR veteran Mike Massaro has been flying to Bristol to appear in-person with "Chase" updates each week.

On the hard news side, Marty Smith's "Lead Reporter" role has been complimented by Angelique Chengelis and Terry Blount. David Newton will be the subject of a Daly Planet column later this off-season.

Along with Jerry Punch and Rusty Wallace, this daily TV series has been a seemingly endless array of veteran NASCAR personalities who all functioned in support of only one person. Back in 2006, ESPN chose a non-racing experienced host for NASCAR Now. He almost ran this new series into the ground right out of the box.

Erik Kuselias is a stick-and-ball guy, a lawyer by trade, and his second career is sports radio. He had never hosted any type of TV series on ESPN before NASCAR Now. The network knew it was crucial that he be surrounded by experts and analysts all the time simply to be able to provide even the basic information about the sport to the viewers.

On this day, Kuselias introduced Jimmie Johnson as the camera opened wide on the High Definition studio set of NASCAR Now. It was strangely quiet. The reason was simple, no one else was there.

To Johnson's left there was no Stacy Compton, and no Boris Said. Tim Cowlishaw was not waiting to have his turn with the champ, and Brad Daugherty was not standing-by on the satellite video screen to offers his thoughts and questions.

On the TV monitor wall where the reporters appear, there was no Marty Smith or Terry Blount. Over by the Home Depot "garage" on the set, there was no Mike Massaro.

In what may have been one of the worst studio television production decisions of the year, ESPN plunked the NEXTEL Cup Champ on the set with the one person on the entire NASCAR Now staff who knows absolutely nothing about stock car racing.

Here are some excerpts of questions asked to Johnson by Kuselias:

"Were you nervous (before the Homestead race)?"

"Did you know where Jeff was on the track (at Homestead)?"

"Did you have a winning car at Homestead?"

"What are you thinking there (while crossing the finish line for the NEXTEL Cup Championship)?"

"How did you celebrate?"

"How would you feel if you averaged a 5.1 place finish for "The Chase" and came in second (like Gordon)?"

"Boris Said described your life as the American Dream...what other (non-NASCAR) things would you like to do?"

In closing the program segment, Kuselias said "I saw you in the ESPN lunch line...people were happy for you."

Kuselias had nothing more to say to the champ, because he knows nothing about the history or dynamics of NASCAR. He is NASCAR illiterate.

As with most NASCAR professionals, Johnson is made of Teflon and everything thrown at him by uninformed media types like Kuselias just slides right off. Stripped of his Lowe's, Chevy, and NASCAR logos by the ESPN fashion police, Johnson still managed to maintain his cool and take this embarrassing interview in stride.

After ignoring Dale Earnhardt Junior in Homestead, ESPN assigned Shannon Spake to follow-up with Johnson's new teammate. The relief on Junior's face after the race was clear, but his words were absolutely amazing.

"It will be nice to get around good people and quit having to deal with jerks," said Junior about his move out of DEI. This set Johnson up to welcome him with open arms on the show, and predict that both Junior and Casey Mears will wind-up making "The Chase" in 2008. That would be the last thing Johnson contributed.

Out of the next commercial, and with Johnson still on the set, NASCAR Now ran a pre-produced feature talking about the "silly season." Ryan Burr lent his voice to a three minute review of exactly the same content fans can read on Jayski.com anytime.

Amazingly enough, although the Jayski site is wholly-owned by ESPN, it was never mentioned. Imagine choosing to run a three minute "old news" feature with the 2007 NEXTEL Cup Champion sitting silently in the studio.

After the feature, as a closing question, Kuselias turned to Johnson and asked "when did you know you had made it, and could drive with anyone in NEXTEL Cup?" Johnson deflected the question by saying he was still hungry and fearful for his job. Then, he just couldn't resist any longer.

As if to end this absolutely awful interview with a parting shot, a smiling Johnson said "the second Championship might have helped."

With even more NASCAR egg on his face than usual, Kuselias threw to yet another ESPN screaming rock music video to end the 2007 run of NASCAR Now.

One can only wonder what was going through the heads of Marty Smith, Stacy Compton, Brad Daugherty, and the entire on-air crew of this TV series. After working hard all season in support of this racing-challenged host, the entire group was shut-out of the final program. What a bizarre ending for the season.

There were no smart or informed questions of Johnson. Stacy Compton and Boris Said with the champ would have been wonderful. Marty Smith putting things in perspective and asking his brand of questions would have been great. As ESPN's lead racing analyst, Rusty Wallace should have appeared in this program, even with a pre-recorded soundbite about Johnson.

This program should have shown-off the "NASCAR Now family" and put a "face" on this series for 2007. Instead, it ended as it started. Bad questions from a host who cannot hide his "deer in the headlights" look when he has to talk NASCAR.

Rumors of wholesale changes on this series for 2008 have been buzzing around for several weeks now, and certainly the network executives know an upgrade is needed. Someone with a firm hand needs to guide this TV series into mainstream NASCAR coverage, and then push it into the sport as a whole.

The Daly Planet will keep you up-to-date on this situation as it begins to take shape for the 2008 season. We would welcome your thoughts on the performance of NASCAR Now for the past ten months.

To add your comment, simply click on the COMMENTS button below and follow the instructions. There is nothing to join, and we do not want your email address. Please read the rules for posting on the right side of the main page, and thanks once again for taking the time to stop by The Daly Planet.
Posted by Daly Planet Editor at 10:24 AM 35 comments: