TNT May Remember The Summer Of 2010 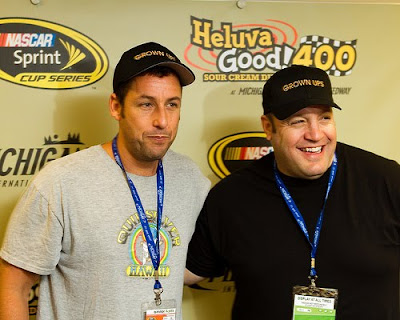 TNT came into the 2010 summer six pack of races loaded for bear. The Turner organization brought all it's TV toys. A feature-packed online video program, popular analyst Kyle Petty and a breath of fresh air on the production side greeted fans.

Lindsay Czarniak settled-in as the infield host and nice guy Adam Alexander made his NASCAR play-by-play debut live in front of a national television audience. Race two of the package came from the Michigan International Speedway.

The pre-race show was crisp and loaded with great features, interviews and comments. Alexander, Petty and Wally Dallenbach Jr. in the TV booth had fun, entertained and poured their energy into the telecast.

RaceBuddy worked great and even showed the infamous debris that brought out the final caution flag. The TNT producer stayed on top of the stories. The director chose the right pictures to show the audience. Everything just clicked.

Thursday brought the TV ratings information for the event. Here is an excerpt of the summary from Sports Media Watch:

Sunday's NASCAR race from Michigan drew the lowest ratings in at least 13 years.

Additionally, this is the first regularly scheduled NASCAR race to dip below a 3.0 U.S. rating since last year's Tums Fast Relief 500 on ABC (2.9).

Of the 13 regularly scheduled NASCAR races this season, Sunday's race is the ninth to have a decline in ratings versus last year.

Despite the lower numbers, Sunday's race was still the top sporting event of the week on cable, in a week that featured six World Cup matches on ESPN*. Overall, the race was the week's tenth-most viewed cable program.

Some of those statements are tough to take after watching TNT put on a very good show using the right TV bells and whistles. There were no technical problems, there was no rain delay and the Sprint Cup Series drivers put on the best show possible.

This time of the year, there is Major League Baseball underway on all the regional sports networks. The World Cup began last week on various ESPN outlets. The NBA has been in an exciting playoff series for the league championship.

Still, the fundamental issues is that television did its part last Sunday. TNT offered a solid broadcast that worked the available on-track action and storylines from green to checkered.

What do you think is the real reason for the decline in TV ratings for the Sprint Cup Series this season? To add your opinion on this topic, just click on the comments button below. This is a family-friendly website, please keep that in mind when posting. Thanks for taking the time to stop by The Daly Planet.
Posted by Daly Planet Editor at 9:00 PM 36 comments:

SPEED's "Race Hub" At A Crossroads 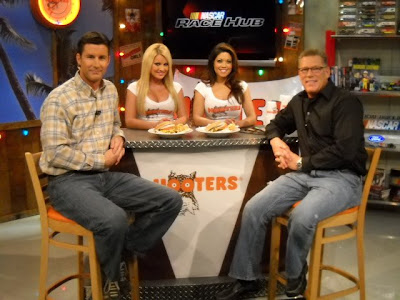 There have already been a lot of changes to the new Race Hub series that SPEED airs Monday through Thursday at 7:30PM. Essentially, this is SPEED's answer to the daily NASCAR Now show that ESPN began back in 2007. At that time, SPEED wanted nothing to do with a daily NASCAR news show.

Wednesday, Rick Allen hosted the program. The network continues to rotate personalities through this position rather than hire a fulltime host for the four day a week series that runs for ten months of the year.

While Allen is an outstanding voice for the Camping World Truck Series and works well in the scripted environment of The SPEED Report, he is an alien in the world of the Sprint Cup Series where he has virtually no experience or point of reference.

Allen's interviews with Marcos Ambrose and Tommy Baldwin hearkened back to the early days of NASCAR Now where ESPN on-air talent would read scripted questions to various NASCAR personalities in a show so dry and controlled it was impossible to watch.

The ultimate irony of Wednesday's show was Allen's questions to Tommy Baldwin about the practice of starting and parking in the Sprint Cup Series. Allen's CWTS boothmate and friend Phil Parsons is currently starting and parking multiple cars for profit in both the Nationwide and Sprint Cup Series. This reality was never referenced, despite Allen boasting that he was asking the tough questions.

This has been the saga of Race Hub, one week a news program and the next a bad version of PM Magazine. Pre-taped perfect features with perfect faces asking perfect questions. What's the point? Fans already have Internet access and Sirius 128 so the news topics of the day are already known.

While ESPN's Shannon Spake led NASCAR Now with the breaking story of Casey Mears being released by Red Bull, Allen led Race Hub with a polite interview of Marcos Ambrose. ESPN had Marty Smith live from Charlotte to update the latest news on the Mears story while Race Hub relied on guest Tommy Balwin to finally bring up the topic twenty minutes into the show.

When Kevin Harvick was griping about Joey Logano's dad, Harvick said the Sprint Cup Series was not Little League baseball. He was implying that the younger Logano needed to grow up and play the game everyone else was playing. SPEED needs to get that message about Race Hub loud and clear. Either play at the top level or go home.

The world of NASCAR news has daily TV and radio shows, websites, blogs and an endless string of Twitter messages and press releases to get the latest information across to the fans, viewers and listeners.

Casey Mears made an appearance on Sirius 128 Wednesday. His story was updated live on NASCAR Now. Over at SPEED, the Mears story was mentioned at the tail of the pre-recorded Race Hub show only after a studio guest brought up the topic.

If SPEED wants to play in the big leagues, Race Hub shows need to be an hour in length, have an experienced host and be done live. This TV series has been on the air since February and has gone nowhere. If SPEED does not want to put the TV resources toward a major league effort for NASCAR news, the network should just take its Little League bat and go home.

We welcome your opinion on this topic. To add your comment, click on the comments button below. This is a family-friendly website, please keep that in mind when posting. Thanks for taking the time to stop by The Daly Planet.
Posted by Daly Planet Editor at 8:00 AM 21 comments: