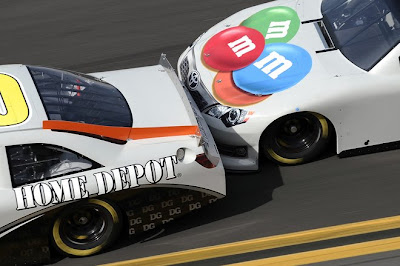 Friday should be a very interesting day in Daytona. NASCAR is talking about trying some new drafting techniques after once again the day closed on Thursday's practice sessions with the two-car "tandem style" drafting going on between teammates.

It will be 9AM ET again for the online portion of the coverage at SPEED.com. There is a link on the webpage specifically for iPhones and iPads, so thank you SPEED. John Roberts hosts the day while Rick Allen and Jeff Hammond will call the early session. Steve Byrnes, Darrell Waltrip and Larry McReynolds will handle the afternoon 1PM ET session on SPEED TV.

The difference on Thursday between the online and TV coverage was striking. The casual and less formal online style really seemed to serve NASCAR, while the standard one segment of program and then another commercial style on SPEED TV was solid on information, but tough to take after the non-commercial streaming show.

There is also a link to the live streaming over on NASCAR.com and for those of you on Twitter, the announcers are taking questions and offering behind the scenes pictures and comments before, during and after the sessions.

Friday will be a good day for TV and media-related comments as NASCAR tries to come to grips once again with a possible season of "tandem racing" on the restrictor plate tracks. What NASCAR might change and how the teams may react will be playing out live during this coverage.

Big thanks to SPEED for stepping up and hosting this testing "combo platter" of online and TV coverage once again. The network has a new interim president in FOX veteran Scott Ackerson and he should be making his presence felt in the NASCAR programming and production category this season.

We will use this post for your comments on the Friday coverage and all the media and NASCAR happenings coming from Daytona. To add your comment, just click the comment button below. This blog auto-opens on android and iPhones, no app needed! Thanks for stopping by.