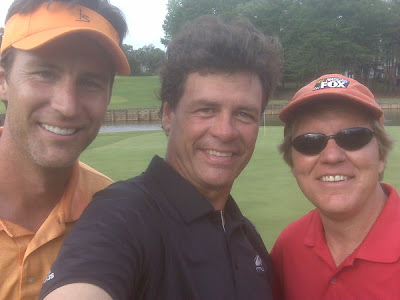 Live Blog: Due to the holiday weekend, there has been very little website traffic. Instead of a new post for the trucks Friday night, we will use this post for live blog comments on the TV coverage from SPEED. Thanks, everyone!

Coming off a great showing in Martinvsille, the Camping World Truck Series gets some primetime exposure on SPEED Friday night in Nashville. After almost eight straight hours of the Palm Beach Barrett-Jackson auto auction, the trucks get on the air at 7:30PM ET.

Krista Voda will host The Setup pre-race show with Ray Dunlap and Adam Alexander reporting. At 8PM, coverage will move up to the broadcast booth for Rick Allen, Michael Waltrip and Phil Parsons to call the race.

It seems a bit ironic that as Darrell Waltrip continues to struggle on FOX with the Sprint Cup Series telecasts, his younger brother Michael has developed into a solid third member of the SPEED truck series TV team.

With the Waltrips, the real challenge often seems to be getting them to say less and allow others to contribute more. Michael got the message. Instead of talking over Parsons and letting his enthusiasm get in the way of Allen calling the race, the younger Waltrip has found his niche.

Working for Showtime this season may have helped. On the Inside NASCAR series, Waltrip has to dress like an adult and talk like one. These days, when Waltrip looks around on the studio set he sees Brad Daugherty, Randy Pemberton and Chris Myers staring right back at him.

In Martinsville, the truck series was produced for the fans. Stories were followed, racing was featured and the no-nonsense approach that has become a hallmark of this production team was on display. Point the cameras and let the drivers do the rest.

There is no "Ole DW" this weekend. No Hollywood Hotel, Slice of Pizzi or Digger. SPEED and ESPN share a weekend without the big boys and all their toys. That may be perfect timing.

Fans will get Rick Allen's energy on Friday night and then the veteran enthusiasm of ESPN's Marty Reid on Saturday. With Mike Joy taking a decidedly lower-key approach to this Sprint Cup Series season, it should be fun to have play-by-play announcers that can get things perking in a hurry on the air.

SPEED gets to follow-up on the Sauter vs. Hornaday incident, which suddenly seems to be all the rage among TV networks. As an added treat on Friday night, the CWTS field also features Steven Wallace, hard-nosed Donny Lia and Brad Keselowski. Once again, the trucks have the potential to be the best racing of the weekend.

TDP will be live blogging this race on Friday night. Please feel free to give us your comments right here on what you think of the CWTS coverage on SPEED this season. To add your opinion, just click on the comments button below. This is a family-friendly website, please keep that in mind when posting. Thanks for taking the time to stop by!
Posted by Daly Planet Editor at 7:00 PM 124 comments: