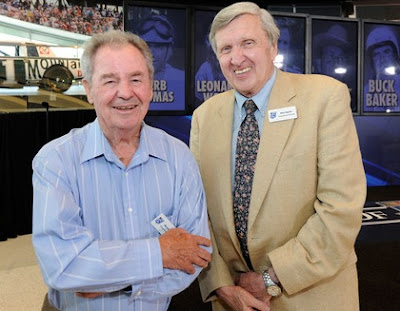 There was an interesting twist on Wednesday during the Hall of Fame selection day. A new award was introduced. It was the first official confirmation that the NASCAR media was finally going to be acknowledged as a vital part of the sport.

Here is the announcement:

NASCAR and the NASCAR Hall of Fame have announced the creation of a new award to honor the media’s contributions to the success of the sport and it carries the names of two legendary broadcasters from the Motor Racing Network.

The careers of Barney Hall and Ken Squier have now been permanently woven into the sport’s historical timeline with this week’s unveiling of the Squier-Hall Award for NASCAR Media Excellence.

A special exhibit will be incorporated into the existing Media Section within the NASCAR Hall of Fame, honoring Hall and Squier – who received the inaugural award during Wednesday’s introduction of the Class of 2013. They now join former MRN broadcaster Ned Jarrett in the halls of the NASCAR shrine, who was inducted in May 2011 as a two-time Cup Series champion.

“Media have played an important role in the growth and popularity of NASCAR over the years,” said Chairman and CEO Brian France. “The voices of Ken Squier and Barney Hall are an indelible part of our sport’s history and we couldn’t be more pleased to recognize their long and outstanding careers.”

Hall is widely known for his calm voice and unmatched storytelling. He’s been a part of MRN’s award-winning race coverage since the network’s debut in 1970.

“I don’t think I could have picked anybody I’ve ever enjoyed working with as much as I did Ken,” Hall said. “He taught me that you don’t scream and holler on the air. You get excited in your voice, but there’s a way to do it without screaming and yelling.”

Squier also was part of the MRN team starting in 1970. His golden voice helped take NASCAR to a national audience thirsting for live coverage. He moved from the radio booth to network television at CBS, perhaps best-known for his work during the 1979 Daytona 500. That day, Squier welcomed millions of viewers to the first live flag-to-flag coverage of “The Great American Race” … his phrase which has stuck with the event ever since.

“I was blessed and fortunate with how things worked out,” Squier said. “To be a small part of anything as large as this is a pretty good deal.”

Each year, five nominees will be selected by a panel that includes NASCAR executives, Hall of Fame staff and the president of the National Motorsports Press Association. From there, a voting panel will select the winner of the Squier-Hall Award for NASCAR Media Excellence, which will be announced in conjunction with annual Hall of Fame festivities.

“Ken Squier and Barney Hall provided my primary education about the sport and fueled my passion for it,” said MRN President and Executive Producer David Hyatt. “No other broadcasters have had as much impact on the development and popularity of NASCAR as Ken and Barney. They each played pivotal roles in the history of the Motor Racing Network, drawing the blueprint for our success. I’m thrilled that the inaugural award has been given to them, and humbled to be part of the industry and the network they helped create.”

Here are some comments on the award:

Darrell Waltrip: "The constant between both of these guys is the humility they bring to the table."

SkirtsandScuffs.com: "One of NASCAR's original broadcasters, Ken Squier worked with Motor Racing Network to take NASCAR to a broader audience. His distinctive voice took listeners to the track no matter where they were. Squier first showed his face to audiences with the 1979 Daytona 500, when CBS aired the Great American Race - a name he coined - live for the first time on national television."

SpeedwayMedia.com: "Barney Hall has been part of my Sundays for as long as I remember. The southern gentleman who calls races on the Motor Racing Network is simply the smoothest voice in radio. Race day without Mr. Hall is not race day and yet I wonder where is Chris Economaki? Where are Tom Higgins and David Poole?"

One of the fundamental drawbacks to the Hall was the lack of acknowledging the radio, TV and print media contributions to the sport. On my visit, I was struck by the contrast between the amount of videos featuring NASCAR personalities used to explain the various exhibits and the lack of any designated area that focused on the contributions of those same individuals.

Nothing would make the dry as toast NASCAR Hall of Fame come alive more than having fans sit in a mock MRN radio booth, pick a classic race video and then call the action. How about digging up the original Hollywood Hotel, putting it in the Hall and letting fans record themselves taking a turn at the microphone?

These days, families visiting the Hall come equipped with smart phones or a digital handicam to record the visit. The best part about it is they bring all the technology needed with them. Maybe adding a live webcam so that friends and family back home could watch and listen would spur the kind of interest that cars you can't touch and firesuits behind glass just can't muster.

Happy to have your thoughts on the media's role in NASCAR over the years and what you think the best way to incorporate these reporters, radio announcers and TV personalities into a historical perspective might be. Thank you for taking the time to stop by The Daly Planet.
Posted by Daly Planet Editor at 4:00 AM 21 comments: