The TV Line In The Sand 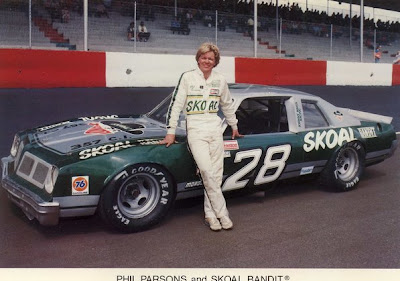 We've been having quite a spirited discussion about the recent announcement that Phil Parsons will be the new pit reporter for the six TNT summer Sprint Cup Series races.

At some point, there has to be a line drawn in the sand that NASCAR personalities who want to mix business with TV should not cross. In my mind, Parsons is crossing it with the TNT deal.

We all remember that back in 2007 one huge issue was the fact that Rusty Wallace was calling the Nationwide and Sprint Cup Series races for ESPN while owning teams in the Nationwide Series. Wallace tried hard, but his views on topics from Kurt Busch to Ryan Newman were just not balanced enough for TV.

In a move that made sense, ESPN put Wallace in the Infield Pit Studio with Allen Bestwick. Wallace could still contribute, but was no longer the primary analyst in the TV booth. When Brad Daugherty bought an interest in an existing Sprint Cup Series team, ESPN allowed him to remain on the air with the same warning. Offer us opinions from your NASCAR experience, but keep it fair.

While we were coming to terms with those two, the business dealings of everyone from Andy Petree to Darrell Waltrip bubbled up. Even the announcers on SPEED's Trackside series were allowed to sell NASCAR sponsorship space on their official SPEED TV shirts.

So, there is no doubt that most of the current NASCAR TV personalities have business dealings or personal connections to the sport. My issue is just how far is too far?

While SPEED does not ask Wendy Venturini to interview her JGR employed husband, they do permit her to cover the Venturini Motorsports pits during ARCA races. Matt Yocum interviewed Tony Stewart for FOX even as he produced Stewart's Sirius radio show. The list goes on and on.

The Parsons issue is one that has an interesting twist. Parsons has been profiled as building a "start and park" business in the Nationwide and Sprint Cup Series. He brings fast qualifying cars to the track, makes the race and then parks prior to the first pit stop. At Sunday's Coke 600, Parsons made over one hundred and fifty thousand dollars for starting and parking his two teams.

Click here for Terry Blount's story at ESPN.com where Texas Motor Speedway President Eddie Gossage accuses Parsons of stealing money and says professional start and park teams should be banned from the sport. Strong words from a veteran promoter.

While Parsons goes about his business of "starting and parking," he also has a TV job. For many years now, Parsons has been the lead analyst for the Camping World Truck Series. Long before Michael Waltrip joined the SPEED TV team on the truck telecasts, it was Parsons working hard and helping to build that brand for the sport.

Parsons has been on other shows on SPEED like Race Hub talking about NASCAR topics, but Sunday in Pocono will be different. As a pit reporter for TNT and a two car team owner, Parsons will literally be a part of the story on which he is reporting. That story will be the Sprint Cup Series race.

Most fans I polled informally on Twitter and Facebook were ambivalent. They had grown so used to conflicts of interest within the ranks of the NASCAR TV crowd that they didn't care. Most just wanted the end product to improve after a rocky stretch with the NASCAR on FOX races.

On one hand, Parsons has worked hard for the sport on the air for many years. His personality and knowledge would be a plus for any telecast. On the other hand, how close is too close? Parsons himself could easily become a part of the story if one of his cars is involved in an incident.

Parsons may be talking to an angry driver who had his championship hopes ruined by one of Parsons' own cars at the start of the race. Perhaps, Parsons will be talking to a crew chief or owner who had a team car sent home by Parsons' two-car effort.

The potential scenarios for trouble just go on and on. In my opinion, things could get ugly fast. This is crossing the TV line in the sand.

How about helping us discuss this issue? To add your opinion, just click on the comments button below. This is a family-friendly website, please keep that in mind when posting. Thank you for taking the time to stop by The Daly Planet.
Posted by Daly Planet Editor at 12:04 AM 51 comments: